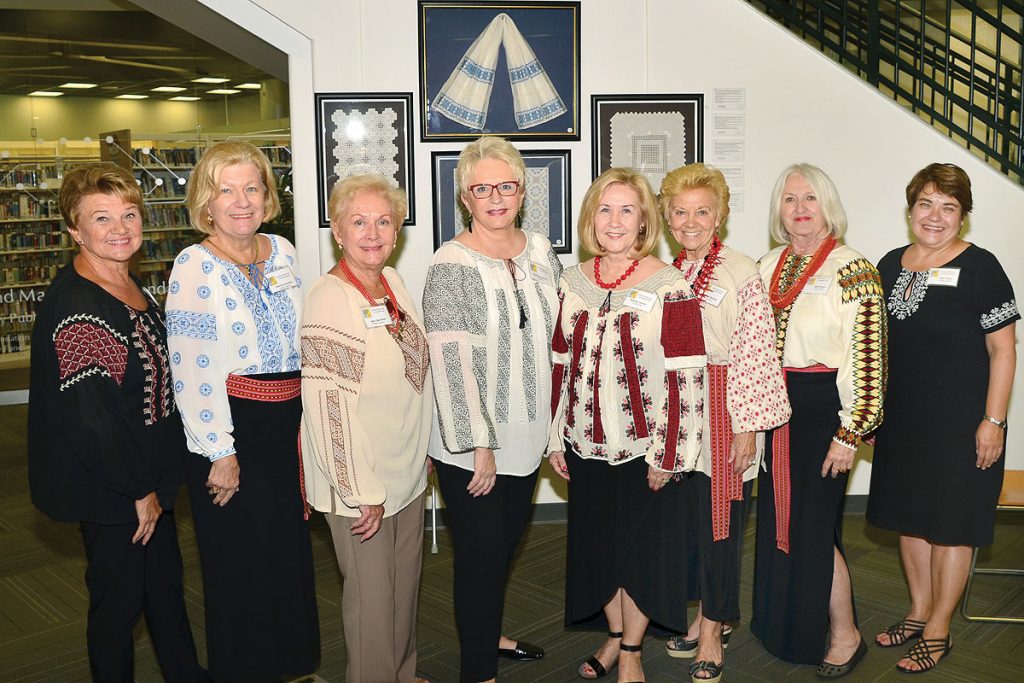 SARASOTA, Fla. – Art can be found in many places. It inspires us and connects us to our inner self. It is found not only in museums but also on our clothing, in our homes and libraries. It is original and creative. One such example is hand-stitched beautiful Ukrainian embroidery, also called “Vyshyvka,” which was featured at the Selby Public Library, the main library in Sarasota County, located in downtown Sarasota in sunny Florida, from April 7 to 28.

The exhibit “Ukrainian Embroidery: An Ancient and Traditional Art Form” showcased 20 exquisite needlework embroideries, each one uniquely representative of a region in Ukraine. Some of the regions presented were Poltava, Kyiv and Chernihiv in the eastern part; Volyn and Polissia in the northwest; and Bukovyna and Hutsulschyna in the west. The embroideries were framed and arranged according to region with information about the symbolism and needlework techniques included for each creation used.

The handbook presented at the exhibit described how the vyshyvka, the ancient art dating back from the first century, used symbolic motifs such as the sun, earth, universe and family to depict fertility, good harvest and other life events. It was used primarily to adorn clothing, but later evolved to be used as decorations for the home and became a symbolic element in traditional ceremonies – weddings, baptisms, funerals and religious observances. It continues to be used by artisans of folk arts and now by designers of haute couture in present-day Ukraine, and is displayed world-wide in fashion magazines.

The vyshyvka exhibit was sponsored by the Ukrainian American Club of Southwest Florida, whose mission is to promote and promulgate the beauty of Ukrainian culture for its members and the general public. As part of its outreach program, the club organizes and sponsors events about Ukrainian traditions.

During the opening reception for the exhibit held on April 7, vyshyvka exhibit chair Katia Steciuk explained, “Every stitch technique, color, shape, design composition and motif of an individual embroidery is rooted in the history, geography, nature, climate and uniqueness of the people of a specific region dating back to pre-Christian times.”

She also thanked all the women and families who donated their embroideries to the Ukrainian American Club of Southwest Florida for this exhibit adding, “It is the unique and varied needlework throughout Ukraine, that together forms the rich tapestry that elevates Ukrainian embroideries to an art form. It is our national treasure.”

Daria Tomashosky, president of the Ukrainian American Club of Southwest Florida, extended her warm wishes to all for attending this auspicious occasion. She thanked Dr. Steciuk for her extensive research, writing and planning of this event. Both she and Dr. Steciuk also acknowledged and lauded the work of Klara Szpiczka, project chair, for her expertise in the art of vyshyvky and preparation of the embroideries for this project. A television interview about the exhibit featuring Dr. Steciuk and Mrs. Tomashosky, held in Mrs. Szpiczka’s home, was aired on ABC Channel 7 News. SNN (Sarasota News Network) also featured information about the exhibit, along with samples of the vyshyvky, on its news broadcast.

During the reception, delicious hors d’oeuvres were served, and embroidery techniques were demonstrated by Halyna Lisnyczyj in the library rotunda. Musical interludes were provided by Roma Long on bandura, Roman Semenowycz – mandolin and Vlad Szpiczka – accordion. After the program, guests continued their spirit of levity with a sing-along with the musicians.