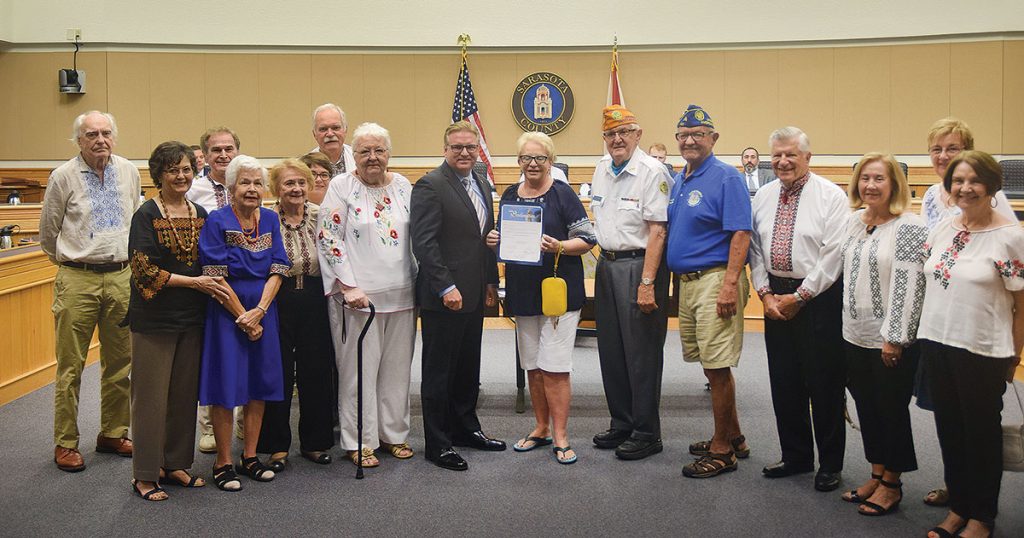 VENICE, Florida – On July 10, at its meeting in Venice, Fla., the Sarasota Board of County Commissioners presented to members of the Ukrainian American community the proclamation designating August 24, 2018, as Ukrainian Independence Day.

The proclamation was read by Commissioner Michael Moran in the presence of Chair Nancy Detert and Commissioners Charles Hines, Paul Caragiulo and Alan Maio.

Accepting the proclamation on behalf of the Ukrainian American Organizations of Southwest Florida was Daria Tomashosky, who thanked the commissioners for their recognition of Ukraine’s 27th Independence Day and their awareness that, at present, Ukraine is fighting Russian aggression on its eastern borders.

The struggle for independence has been a very long one for Ukraine, so it is especially joyous today for Ukrainian people everywhere to celebrate the 27th anniversary of the re-establishment of Ukraine’s independence, she noted.

Earlier, the North Port City Commission at its meeting on July 5 presented to Ukrainian American community representatives their proclamation of Ukrainian Independence Day.

Accepting the proclamation on behalf of the Ukrainian American community of Southwest Florida was Ms. Tomashosky, who thanked the North Port city officials and noted that, with the help of the United States and European nations, Ukraine has a chance to live in harmony and enjoy economic well-being.