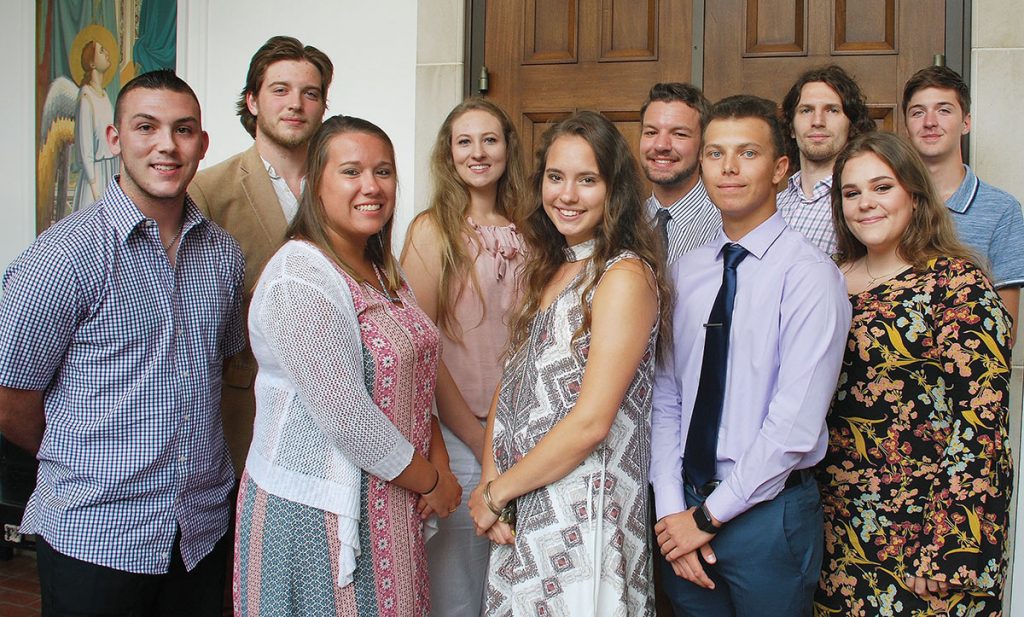 PITTSBURGH – The Ukrainian Technological Society (UTS) of Pittsburgh presented its 2018 scholarship awards to 14 undergraduate and graduate students from Western Pennsylvania and Ohio in ceremonies at the Henry Clay Frick Fine Arts Building on the University of Pittsburgh campus on Sunday, August 5.

Students, family members, UTS members and guests were welcomed by UTS Executive Board President George Honchar, who provided an overview of the UTS – now in its 49th year – and its activities.  In his opening remarks, he thanked the many donors who have generously offered their financial support to the scholarship program, which has helped students pursue higher education in a variety of fields. He also acknowledged the friends and family – especially parents – who supported all the scholarship recipients in their academic pursuits.

The featured speaker for the award ceremony was Michael Haritan, a Pittsburgh-based professional photographer specializing in corporate, architectural and documentary photography.  Mr. Haritan presented an abbreviated version of his photographic documentary titled, “Chernobyl – Causes, Cover-Up and Consequences.”  Mr. Haritan visited Ukraine in 2016 and again in 2018, and has taken two private tours to Chornobyl – site of the world’s worst nuclear disaster – and the abandoned city of Prypiat, shooting hundreds of photographs that became the foundation of his documentary.

During his most recent trip, Mr. Haritan interviewed and photographed the “babas” (elderly women) still living in the exclusion zone. Through powerful and moving images, Mr. Haritan told the unheard and forgotten stories of the many inhabitants and victims of this ongoing tragedy.  He continues to share this important work with church, school, emergency response, professional and civic groups across the country and has raised over $10,000 in donations, in cooperation with Sister Ann Laszok, OSBM, for the children and orphans in Ukraine affected by nuclear radiation.

Following the presentation and a question and answer session, Mr. Honchar and UTS Executive Board Member Nickolas C. Kotow awarded the 14 scholarships totaling $9,000.  This marked the 46th year of the UTS Scholarship Program, with 469 separate awards made totaling $222,200 to 291 different students.  The UTS gave an additional $500 to Smoloskyp Inc. to fund scholarships for students in Ukraine.

The Michael and Olga Lisewych Memorial Scholarship, awarded to a student pursuing engineering with outstanding academic achievement and participation in Ukrainian community activities, was awarded to Dmytri Rakovan of Baden, Pa.

The Chester and Olga Manasterski Memorial Scholarship, awarded to a student with outstanding academic achievement and service to the Ukrainian community and underwritten by sons Myron and Gregory Manasterski, was awarded to Nicholas Spak of Pittsburgh.

The Ukrainian Selfreliance of Western Pennsylvania FCU Scholarship, awarded to a member who has shown excellence in both academic studies and community involvement, was awarded to Kateryna Czuczman of Pittsburgh.

The Dr. Michael Kutsenkow Memorial Scholarships, awarded to students with outstanding academic achievement and active participation in the Ukrainian community, were awarded to Katarzyna Goebel of Sewickley, Pa., and Ostap Lutsiv of Carnegie, Pa.

The Michael and Anna Komichak Memorial Scholarship, underwritten by Mr. and Mrs. Michael J. Komichak and Mr. and Mrs. Raymond Komichak, was awarded to Michael Yourstowsky of Canfield, Ohio.

The Ukrainian Cultural Trust Choir of Western Pennsylvania Scholarship, underwritten by the choir, was awarded to Yaryna Korenovska of Carnegie.

The Kateryna Dowbenko Ukrainian Language Scholarship, was awarded to Kateryna Kocelko of Pittsburgh.

A social hour held in the atrium followed the program.

To learn more about the UTS, its scholarship program, and other activities, visit the website at  www.utspgh.org.  Or “friend” the UTS on Facebook at “Ukrainian Technological Society (UTS) of Pittsburgh.”  Donations toward the 2019 UTS Scholarship Program are now being accepted.  Donations are tax-deductible, as provided by law, as the UTS has Internal Revenue Code 501(c)(3) designation.  Donations or inquiries may be sent to the UTS at P.O. Box 4277, Pittsburgh, PA 15203.  Donations can also be made securely via PayPal by visiting the UTS website and clicking on the “Support” page.  Readers may contact the UTS by e-mail at  utspgh@gmail.com.