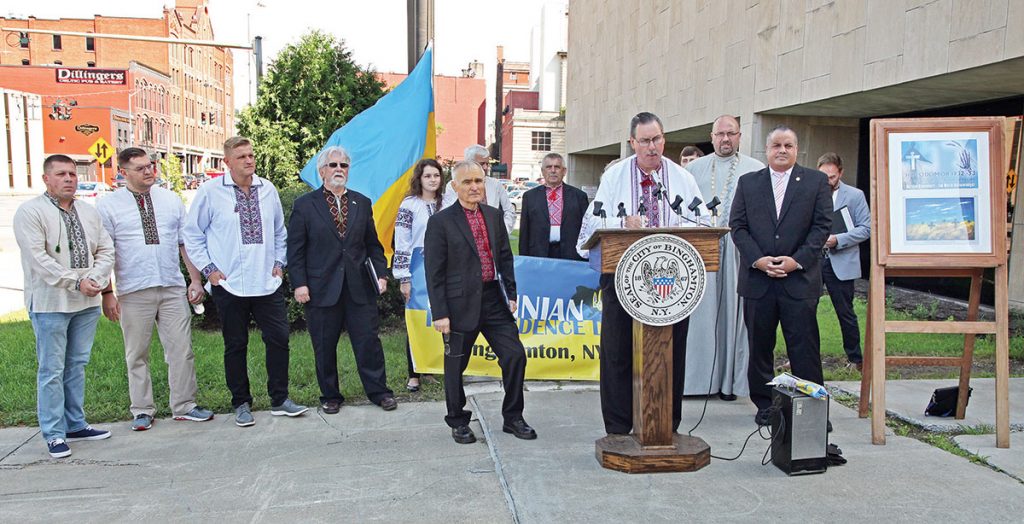 Since 1950, the local branch of the Ukrainian Congress Committee of America (UCCA) has organized an annual celebration of Ukrainian Independence Day at Binghamton City Hall with a flag-raising and program. Every 10 years, the community also remembers the Holodomor at City Hall with a program and informative display. This year, the UCCA combined celebration of the 27th anniversary of Ukraine’s renewed independence and a commemoration of the 85th anniversary of the Holodomor in one program.

Victor Czumak emceed this event. The Rev. Teodor Czabala, pastor of Sacred Heart Ukrainian Catholic Church, the Rev. Ivan Synevsky of St. John the Baptist Ukrainian Orthodox Church, and Vitali Ilchishin of the Together for Ukraine Foundation at First Ukrainian Pentecostal Church reminded the audience of the power of the “Prayer for Ukraine” and the sacrifices made to help Ukraine survive the current Russian aggression.

Lubomyr Zobniw, chairman of Binghamton UCCA branch, thanked Binghamton City Hall for welcoming the Ukrainian community. He noted that, for almost 20 years, Mayor Richard C. David has taken part in celebrating and commemorating Ukraine’s historic events, first as assistant to the mayor and now as mayor.

Mayor David and Mr. Zobniw shared recollections from earlier years. These city hall events were especially important to Maria Zobniw, who was killed during the shooting massacre at the American Civic Association while helping others. She took personal pride in organizing the Ukrainian Independence Day and Holodomor commemorations at Binghamton City Hall and believed Ukrainian history teaches Americans that national independence is precious and hard earned, and that we should share our Ukrainian heritage within our local community. This year marks 10th anniversary of Ms. Zobniw’s last birthday.

Taras Stets gave a historic commentary for the occasion, covering past and current challenges for Ukraine and lessons for every American. “This independence commemorates Ukraine’s struggle for survival across centuries of foreign occupation,” he said. For over two centuries, the United States has been fortunate that it has only one Independence Day, on the Fourth of July, to celebrate and is fortunate it does not have a powerful aggressive empire-building neighbor that invades and constantly seizes neighboring countries’ territory, Mr. Stets pointed out.

Stephan Wasylko, a retired minister counselor with the U.S. Foreign Service, thanked the New York State’s legislative bodies, the Senate and the Assembly, for their broad-based support in adopting legislative resolutions on May 1 and May 16  “Commemorating the 85th Anniversary of the Ukrainian Famine-Genocide, Known as the Holodomor.” He thanked local legislators for supporting the resolution and highlighted the phrase, “Ukraine Remembers and The World Acknowledges,” referencing the Holodomor display placed next to the podium.

Mr. Czumak recited in English the “Prayer for Ukraine,” which served as an introduction to Eugene Czebiniak, choir director at Sacred Heart Ukrainian Catholic Church, who sang the prayer in Ukrainian.

After the “Pledge of Allegiance” and the singing of the Ukrainian national anthem, participants embraced each other, while admiring each other’s embroidered finery, and spoke with attending TV stations, WBNG and WIVT. The Binghamton Press and the Sun Newspapers also were present to report on the event.