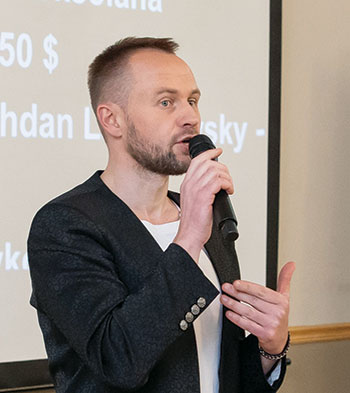 The Chicago luncheon, held on October 28, gathered close to 300 friends and benefactors, including some 40 businesspeople from Ukraine who support UCU and their families. This was the 15th anniversary of banquets in Chicago and $165,000 was raised. The highlight of the afternoon was the lively presentation of retired Rear Admiral Boris Lushniak, M.D. Dr. Lushniak is a Chicago native and member of the board of directors of the Ukrainian Catholic Education Foundation. UCEF Chief Operating Officer Joe Solimini noted that “the event emphasized scholarships.”

The New York luncheon, held on November 4, raised $230,000, with 220 guests in attendance, including many long-time donors. It was also the 15th anniversary of banquets in New York. The versatile Dr. Lushniak traveled to New York to serve as emcee. Prof. Fukuyama, author of the book “The End of History” and a visiting professor at UCU, was the main speaker.

Warren hosted a luncheon on November 11. The UCU luncheon returned to that city after a hiatus of 10 years. Close to 100 people attended, and $80,000 was raised. The highlight of the event was noted business consultant Mr. Slywotzky, a visiting professor at the UCU Lviv Business School. “Mr. Slywotzky shared facts about UCU with the audience, which he calls ‘the most exciting start-up, worthy of your investment,’” recounted Mr. Solimini.

Audiences in all three cities learned what’s new at UCU while viewing a brief video, “Good News from UCU.” Among the stories told by the video were: the efforts of a graduate of UCU’s School of Management to organize civic activism in his native Dnipro; UCU students who travel to bring some joy to children living near the front in the Donetsk and Luhansk regions; the top students who are now able to enter the university thanks to scholarship donations; and the victory of UCU’s data science students at an international competition held in Toronto.

All three cities enjoyed the musical entertainment provided by Mr. Tabakov. In addition to singing his own songs, the performer from Ukraine also turned the microphone over to various audience members when singing popular Ukrainian tunes.