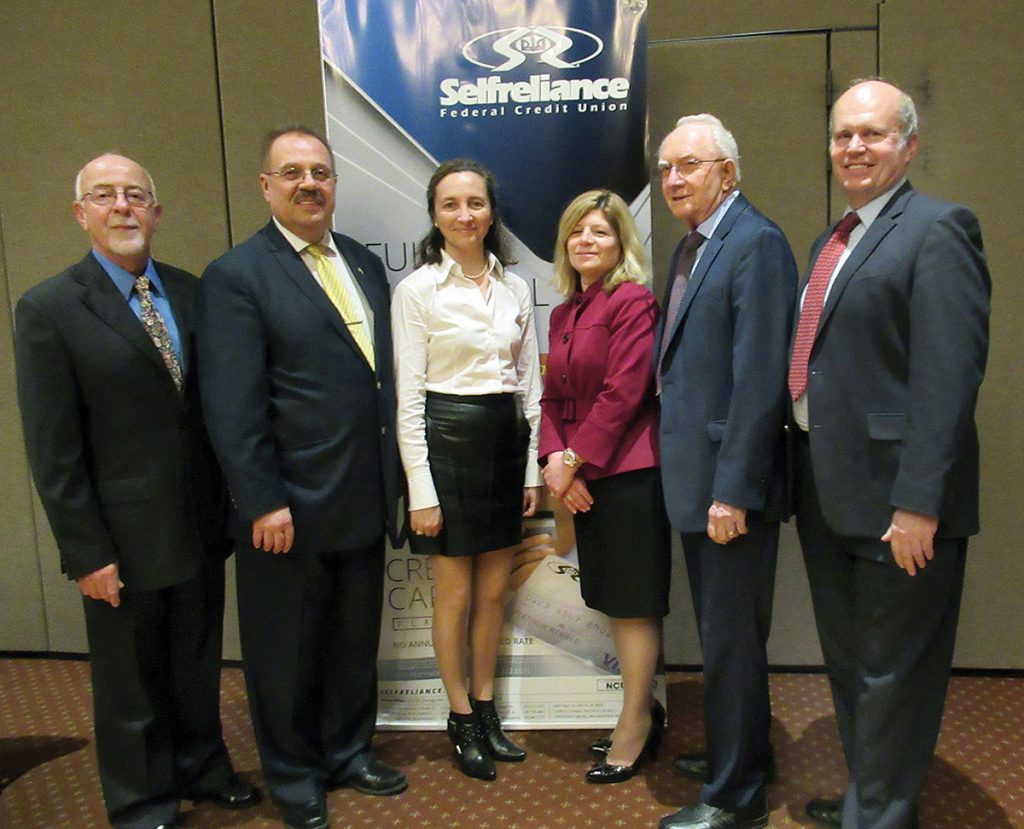 CHICAGO – The 68th annual meeting of the membership of Selfreliance Federal Credit Union took place Sunday, March 31, at the Credit Union’s Home Office in Chicago. The meeting was simulcast in New Jersey, at the Ukrainian American Cultural Center of New Jersey in Whippany.

In New Jersey, the meeting was called to order by Orest Ciapka of the Selfreliance FCU New Jersey Advisory Board. He introduced the Rev. Stepan Bilyk, pastor of St. John the Baptist Ukrainian Catholic Church in Whippany, who read the invocation. This was followed by a report from the New Jersey Advisory Board by Daria Twardowsky-Vincent; remarks by Michael Koziupa, Whippany branch manager, and Irene Agne, Newark branch manager.

Once the cameras were turned on in both locations for the simulcast, Chairman of the Board of Directors Michael R. Kos called for the posting of colors by the Ukrainian American Veterans. Renditions of the national anthems of the United States and Ukraine followed, as well as “God Bless America,” performed by the Ukrainian Bandurist Chorus. A total of 146 members signed in: 96 in Chicago and 50 in New Jersey.

Chairman Kos officially opened the meeting and asked Bishop Benedict Aleksiychuk to read the invocation. The bishop took advantage of the opportunity to thank Selfreliance FCU for its work and stated that, in his recent letter to parishioners, he encouraged them to become members of the credit union – so that the credit union would be able, in turn, to increase its support of Ukrainian community institutions.

Mr. Kos introduced the board and committee members in Illinois as well as in New Jersey. Board Secretary Victor Wojtychiw read the minutes of the 67th annual meeting, and reports of the credit union’s elected leaders followed.

Outgoing President/CEO Watral described the credit union’s 2018 achievements. He confirmed that the financial statements for 2018 validate the credit union’s viability and consistent growth. In 2018 net income surpassed $2.4 million and equity now exceeds a record $589 million. The credit union has expanded its operations, now encompassing three states. Mr. Watral confirmed that Selfreliance FCU is among the most stable financial institutions in the United States, maintaining its commitment to provide the highest caliber financial services in a professional, caring environment.

President/CEO Kutnyy stated that in 2019 Selfreliance FCU will focus on enhancing its offerings, providing new products, optimizing the existing services portfolio, investing in employee training programs and expanding into digital marketing. Mr. Kutnyy stated that the credit union is committed to investing in new technology and continuing to deliver products and services that benefit our members.

President/CEO Kutnyy then presented the budget for 2019, which was approved as read. As there were no further questions or comments from the floor, Mr. Kos ended the simulcast, saying farewell to members in New Jersey.