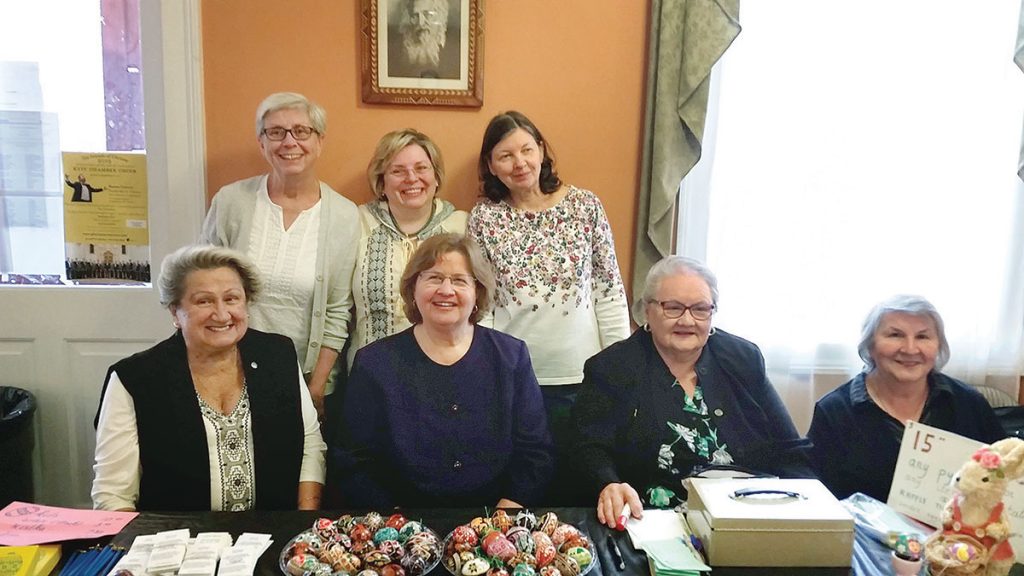 JAMAICA PLAIN, Mass. – For the past 15 years, a dozen women members of the Boston Branch of the Ukrainian American Youth Association (UAYA) have been gathering in their local “domivka” (club house) every Sunday after the sung liturgy for five or six hours to write pysanky from Meatfare Sunday until the fifth Sunday of the Great Fast. They do so in anticipation of the annual pysaanka raffle and sale that is always held on new calendar Palm, or Willow, Sunday at Christ the King Ukrainian Catholic Parish Center. This year they decorated approximately 300 eggs.

In addition to writing these pysanky, a few of the women, Olha Banadyga Baryska, Marijka Zozula, Jaime Zozula and Anna Nosal, conducted a number of workshops for the children of the branch and spent a day with the students of the local School of Ukrainian Studies (Ridna Shkola).  Ms. Banadyga Baryska also spent a day with the Saturday School of the Croatian community, and a number of the women also conducted classes for the local non-Ukrainian community as well.

“We always hold the event on Palm or Willow Sunday according to the new calendar because it comes first,” Ms. Banadyga Baryska explained, “and this way people who celebrate Easter according to either calendar have an opportunity to get pysanky for their celebration.”

The women raised almost $3,000 from their pysanka raffle and sale and another $1,000 from their kitchen that featured traditional Ukrainian dishes and pastries.  By the end of the day everything had been cleared out.

“All of the money raised by this effort helps underwrite various charitable undertakings of our branch,” said Nicholas Zozula, an attorney who is president of the UAYA branch.  “We annually support the Warm Hearts program, which supplies winters jackets and coats, hats, gloves, knapsacks and school supplies to children in Ukraine who either have been displaced or orphaned by the Russian invasion of Donbas.  We have established a scholarship program for our member children here in Boston and we underwrite their attendance at summer camp in Ellenville, N.Y.”

He added, “We also support the Ukrainian Catholic University and the Sunflower of Peace Charity, which builds and renovates playgrounds in the Donbas. We make donations to the Ukrainian churches here in Boston, to the local Ukrainian American Veterans branch and to Ridna Shkola, and we contribute to the charitable requests of UAYA’s headquarters. And we have even donated to the production of the movie exploring Ukrainian poets living in the New York City area in the 1940s and ’50s.”