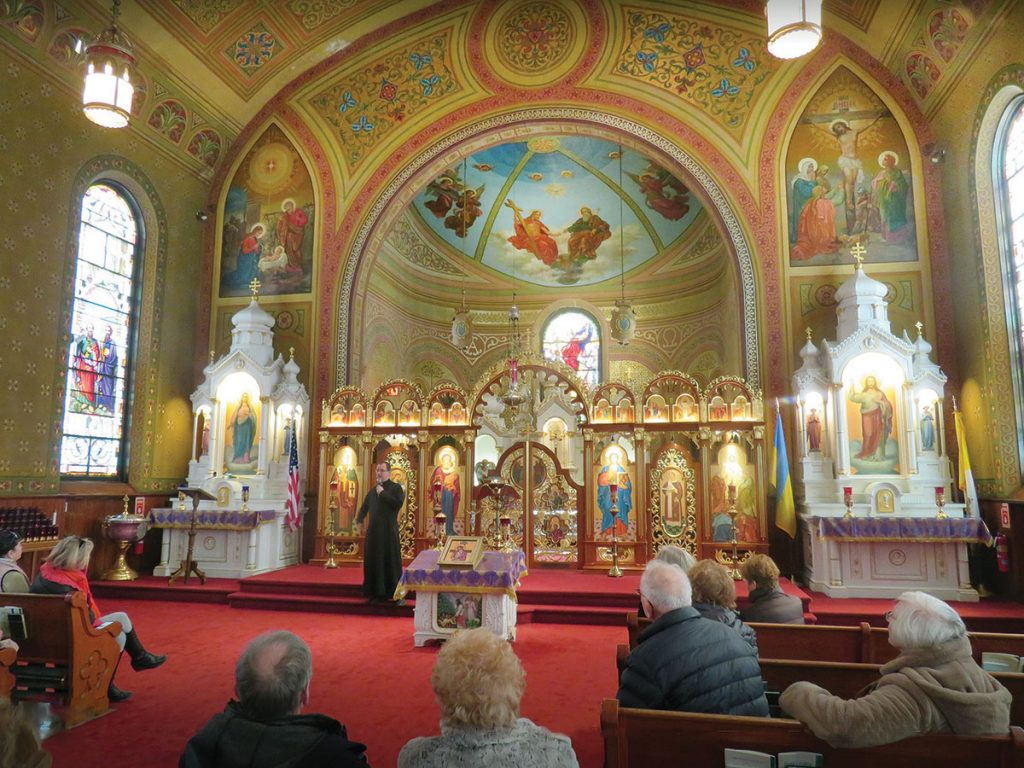 Myroslawa Hill
The Rev. Mykola Ivanov welcomes members of the Ukrainian American Senior Citizens Association of Philadelphia to the Transfiguration of Our Lord Ukrainian Catholic Church in Shamokin, Pa.

JENKINTOWN, Pa. – Members of the Ukrainian American Senior Citizens Association of Philadelphia (UASCA) had the opportunity to visit three historic Ukrainian Catholic churches in upstate Pennsylvania. The April 2 trip was capably organized by one of its members, Yurko Danyliw. Mr. Danyliw has spent many years researching the history of Ukrainian churches and the immigrants who arrived in America during the late 19th and early 20th centuries. He personally visited 125 churches in Pennsylvania.

As we traveled, Mr. Danyliw spoke on the history of what we were about to experience. We learned that the first immigrants that came to the coal regions of Pennsylvania faced many difficulties, struggles and challenges, and labored arduously for very little money. Yet, their deep faith, love of God and their Ukrainian Catholic Church were so strong, that they were willing to make many sacrifices to build their own churches. Today, these houses of worship stand as a testament to those pioneering immigrants and to the priests who led them.

We first visited the church of the Transfiguration of Our Lord located in Shamokin. The Rev. Mykola Ivanov, its very energetic and enthusiastic pastor, welcomed us warmly. Built in 1885 through the efforts of the Rev. Ivan Wolansky, it’s the oldest surviving Ukrainian Catholic Church in America. (The original church in Shenandoah burned down). We were surprised to learn that in the late 19th and early 20th centuries, Shamokin was a hub for Ukrainian immigrants. Father Ivanov spoke compassionately of the love and loyalty of his parishioners for their Church and its traditions, and invited us to visit again.

Ss. Peter and Paul in Mount Carmel was the second church we visited. Once again, we were warmly greeted by its dedicated and charismatic pastor, the Very Rev. Archpriest Michael Hutsko. Built in 1891, the church once had a large, vibrant parish. Today, the parish is much smaller, but it is still active. The parishioners, some non-Ukrainian, are dedicated to their beautiful rite and cultural traditions, and Father Hutsko is very grateful for their support.

The final church on our tour was Assumption of the Blessed Virgin Mary in Centralia. It also is served by Father Hutsko. The church was built in 1911, when Centralia was a thriving community. However, in May 1962, a mine fire broke out in the coal seams under Centralia, which resulted in the majority of the town’s population leaving. Before Centralia started burning from below, more than 1,000 people lived there. At the last count, there were six.

Despite the continuously burning fire, Assumption remains open. People from surrounding areas attend the divine liturgy and support the church. In 1987, through the efforts of Archbishop-Metropolitan Stephen Sulyk, an engineering survey under the church found that the structure was built on top of rock rather than coal. Miraculously, the plans to demolish the church were abandoned and the church was saved. In fact, in 2015, Patriarch Sviatoslav officially declared the church a pilgrimage site, and every year, on the last Sunday in August, hundreds of pilgrims come to worship and pray.

All three churches were awe-inspiring, each having a magnificent iconostas.

After the tours, the seniors were treated to a delicious luncheon at the Ukrainian Homestead in Lehighton.

Although due to lack of economic opportunities many moved away from upstate Pennsylvania, those who stayed (many fourth-generation) remain steadfast and faithful to their Ukrainian Church and traditions. May they serve as examples to us all.

The members of UASCA thanked Fathers Ivanov and Hutsko for being such gracious hosts and Mr. Danyliw for his exemplary efforts in organizing the trip. The group looks forward to visiting more churches in the future.

The trip was partially funded by the Ukrainian Foundation of Philadelphia and Ukrainian Federal Credit Union.