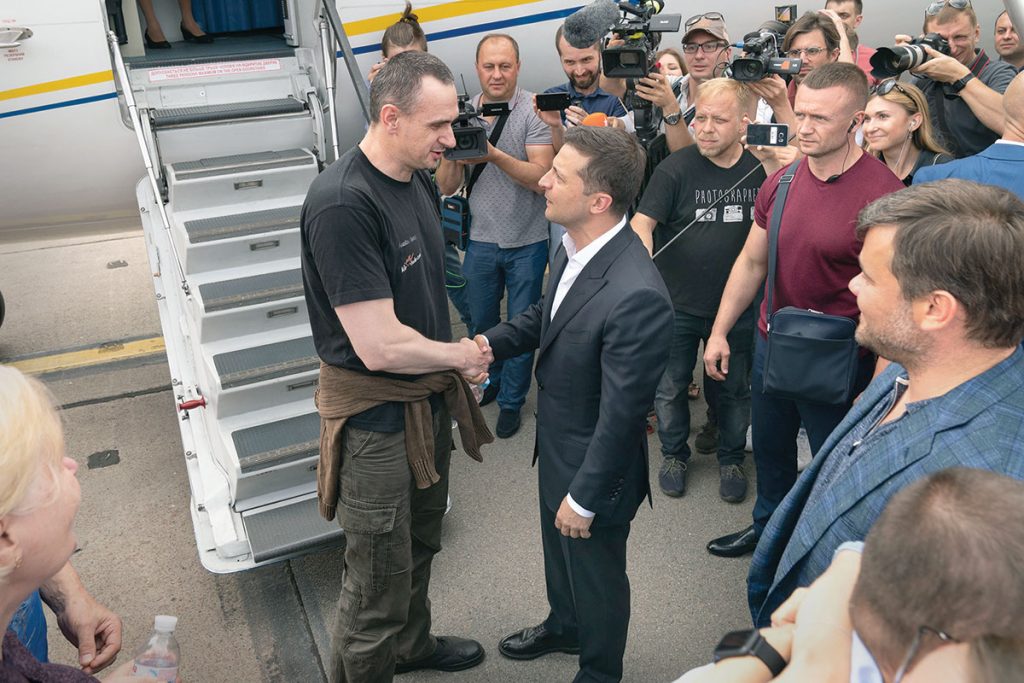 Presidential Office of Ukraine
President Volodymyr Zelenskyy greets Oleh Sentsov as he disembarks from the plane that brought him and 34 other political prisoners and hostages held by Russia back home to Ukraine.

KYIV – Moscow freed 35 Ukrainian political prisoners and hostages in an exchange involving the same number of detainees held by Kyiv because of their hostile activities on behalf of Russia.

The return to Ukraine on September 7 of the Ukrainian captives, including the internationally renowned filmmaker from Crimea, Oleh Sentsov, generated joy and hope, but also some controversy.

There were moving scenes at Kyiv’s Boryspil International Airport as the families and Ukraine’s president welcomed home the exhausted, relieved and still somewhat bewildered representatives of Ukraine’s current battle for its freedom. Many who were there, or were watching on TV, had tears in their eyes.

Barely a week earlier, reports of an imminent exchange of prisoners between Russia and Ukraine had dominated the media and journalists had spent hours waiting for it to happen. It did not, and so on this occasion the news that the swap was actually about to happen was initially treated by many with a healthy dose of skepticism.

When it was confirmed that planes from both sides were airborne to pick up their respective political “cargoes,” Ukrainians eagerly began to watch and listen to what was happening.

The deal on the prisoner swap was finally effected as a result of direct telephone conversations between the new Ukrainian president, Volodymyr Zelenskyy, and his Russian counterpart, Vladimir Putin. The Ukrainian leader confirmed that he had spoken by telephone with Mr. Putin and reached an agreement “on the first stage to unblock our dialogue and on the first step to stop the war.”

The Moscow Times dubbed it “a carefully negotiated swap that could signal a thaw in relations.” Because it included “high-profile figures like filmmaker Oleh Sentsov and potential MH17 witness Vladimir Tsemakh”, [it]was seen as “a key step toward resolving the conflict in eastern Ukraine that has claimed more than 13,000 lives since it broke out in 2014.”

The exchange drew considerable reaction from various foreign leaders. U.S. President Donald Trump congratulated both countries, tweeting that the move was “perhaps a first giant step to peace.” The leaders of Germany, France and the European Union also welcomed it.

Nevertheless, in Ukraine, numerous commentators wondered what the real price of the deal had been and what it portends. They, like some of those dismayed in the Netherlands and Australia, including at the official levels, expressed surprise and disappointment that Kyiv has let Mr. Tsemakh return to Russia as part of the arrangement.

Mr. Tsemakh had commanded an air-defense unit of the Russia-backed forces fighting in the Donbas at the time of the downing of Malaysia Airlines Flight 17 (MH17) in July 2017 and boasted about his role in shooting down the civilian airliner, killing all 298 people on board.

He was captured by Ukrainian security forces in June of this year in a covert operation behind enemy lines. Mr. Tsemakh’s appearance before an international court would have been a major embarrassment for President Putin.

Speaking at the airport, President Zelenskyy gave assurances that there was no cause for concern. He stressed that Mr. Tsemakh, a person of interest in the MH17 investigation, had been properly questioned and that Dutch investigators had been given access to him. Indeed, the president intimated that the exchange had been held up because of this.

Eleven of the Ukrainians freed had been political prisoners jailed on trumped-up political charges. Some had been imprisoned since President Putin launched his aggressive actions in Crimea and the Donbas in the spring of 2014. These included Mr. Sentsov and Oleksandr Kolchenko, who were sentenced to prison terms of 20 and 10 years, respectively, for allegedly plotting terroristic acts in Crimea, and in reality for opposing the Russian occupation of Crimea. Mykola Karpiuk and Stanislav Klykh were accused of having fought on the side of Chechen rebels against the Kremlin in the 1990s, tortured and given sentences of more than 20 years each.

Others had subsequently been detained while visiting Moscow, as was the case with journalist Roman Sushchenko in 2016, or even abducted after being lured by a “virtual” girlfriend on the Internet, as happened in August 2017 with 19-year-old Pavlo Hryb while he was visiting Belarus. Volodymyr Balukh was arrested in December 2016 in Crimea and given a five-year prison term for not accepting Russia’s policies. And Crimean Tatar activist Edem Bekirov was detained in December 2018 while returning to Crimea from mainland Ukraine to visit his elderly mother.

Others released were Oleksiy Syzonovych, a 62-year-old pensioner, Yevhen Panov and Artur Panov, all of whom were accused of plotting terroristic acts.

Twenty-four of the Ukrainians freed were sailors in the Ukrainian Navy who were seized along with their three vessels by Russia in the Black Sea in November 2017. At Ukraine’s request, their detention by Russian forces was considered by the International Tribunal for the Law of the Sea. On May 25, the tribunal called for the immediate release of the Ukrainian servicemen and the return of their vessels.

Ukraine’s authorities, both under President Petro Poroshenko and now under his successor, as well as various Ukrainian civil rights organizations, have vigorously sought the release of these and other Ukrainian captives held by Moscow. The campaign in defense of Mr. Sentsov was the most visible aspect of this effort, and it managed to attract considerable international support.

Until recently, however, these efforts, as well as repeated attempts to agree on an exchange of prisoners of war and hostages within the Minsk process established in 2014 for peace-building purposes as regards the war in the Donbas, seemed to no avail. Mr. Putin remained intransigent and seemingly set on extracting the highest price for any “concession” in this regard.

Commentators and analysts, and not only in Ukraine, have been busy trying to explain how this unexpected prisoner exchange came about. Some suggest that the emergence of a new political leadership in Kyiv, albeit standing firm in defense of Ukraine’s independence and territorial integrity, has permitted Mr. Putin to begin sounding a more conciliatory note.

Others mention the pressure on both Moscow and Kyiv from the G-7 countries in particular, to renew some sort of dialogue and move from confrontation to preliminary cautious contacts. Mr. Putin wants to resume his place alongside the G-7, for sanctions to be eased or lifted, for Nord Stream 2 and other vital projects to go ahead, and to ensure that President Trump, French President Emmanuel Macron and German Chancellor Angela Merkel are not averse to this. Meanwhile, Ukraine relies on continuing Euro-Atlantic support – political, economic and military.

There is also the failure of Mr. Putin’s de facto proxy in Ukraine, Viktor Medvedchuk, and his associates in the pro-Russia Opposition Bloc – For Life, to make more substantial headway in the recent parliamentary elections in Ukraine. Moreover, despite his much-publicized visits to Moscow as a self-styled go-between, Mr. Medvedchuk has not managed to cast himself in the role of a potential broker of a prisoner exchange, and even potential oil deals between Moscow and Kyiv. President Zelenskyy has emphasized that he has no need for Mr. Medvedchuk’s “services” and has distanced himself from this politically toxic fixer.

But analysts appear to agree that the decisive factor that influenced Mr. Putin was probably the Tsemakh issue.

Despite the misgivings in some quarters, the exchange of prisoners has been generally well received. It has raised hopes that the ice has been broken and that it will serve as a catalyst for finding a way forward.

Certainly, in the weeks ahead, it should prove useful. A meeting of the leaders in the Normandy format is expected when Mr. Zelenskyy, as he puts it, will finally look Mr. Putin in the eyes. The leaders of Germany and France have welcomed the prisoner exchange. President Trump is apparently toying with the idea of becoming involved at Ukraine’s invitation in the Normandy process and may be looking for an opportune moment.

Later this month, the Ukrainian president has important trips to the U.S. lined up, to Washington as well as to New York, where he is going to address the United Nations General Assembly.

Meanwhile, the freed Ukrainian captives have been undergoing medical examinations and have begun meeting with the press. Mr. Sentsov and his colleagues have remained unbroken and defiant, and have expressed gratitude to all for the efforts to secure their release. They also emphasize that there should be no easing up of Ukraine’s efforts to defend itself, retrieve occupied territories and, in the meantime, free other prisoners.

Mr. Sentsov has expressed appreciation for President Zelenskyy’s efforts, saying: “I see that he sincerely wants to resolve this conflict for the good of the country, giving up no interests and that’s the right thing.” But he also warned against naiveté. “As to the statement that Russia wants peace,” he elaborated, “even the wolf wearing sheep’s clothing keeps his teeth sharp… Don’t believe it. I don’t.”

Both the Ukrainian president and the newly released captives have been emphasizing that the challenges remain formidable. They, together with Ukrainian Ombudswoman Ludmilla Denisova, who was very active in securing the release of the Ukrainian captives, have stressed that around 100 more Ukrainians remain in Russian jails for political purposes and that their release will remain a priority concern.

In the meantime, Ms. Denisova said, the Ukrainian authorities intend to address the immediate material, social and medical needs of those released and to provide permanent accommodation to Messrs. Sentsov and Kolchenko as they cannot return home to occupied Crimea. She also announced that the Cabinet of Ministers had approved financial aid to each of the 35 returnees in the amount of 100,000 hrv (just over $4,000 U.S.).

According to Mr. Zelenskyy and Ms. Denisova, the long hoped for, but unexpected, breakthrough with the prisoner exchange has encouraged cautious optimism. Both have suggested that there could be more prisoner exchanges by year’s end.