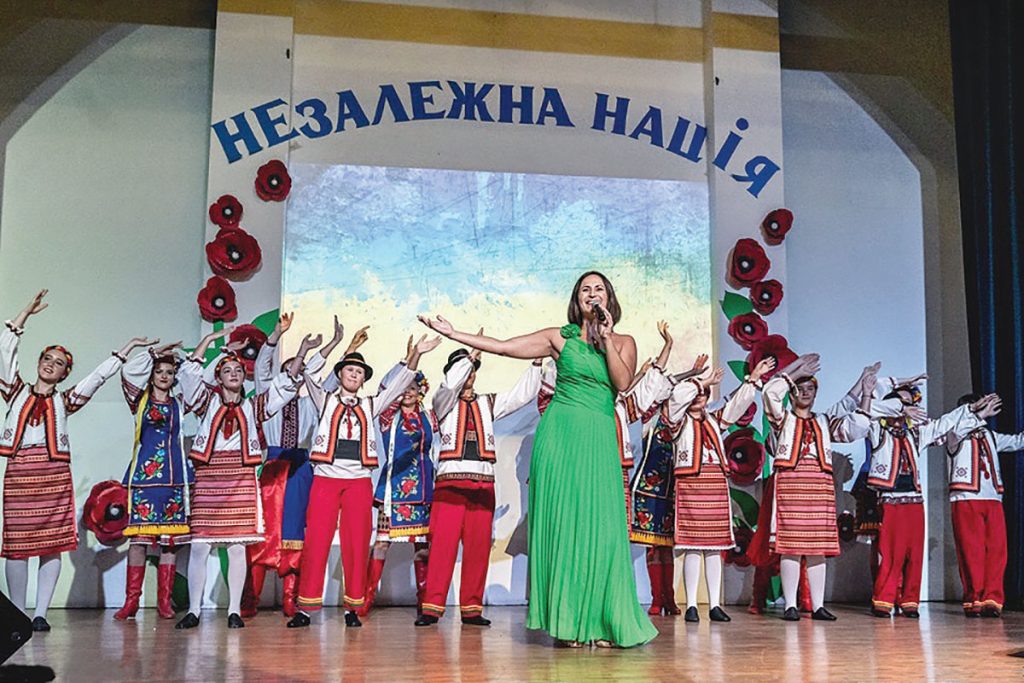 Oleg Kharchenko
Asya Gorska performs the song “My Ukraine” with participants of the concert in the background.

LOS ANGELES – On Sunday, August 25, over 300 people gathered at the Ukrainian Culture Center to celebrate the 28th anniversary of Ukraine’s renewed independence.

Walt Zozula, the center’s president, welcomed everyone with a brief address. Under this year’s theme “One Nation Independent,” the Ukrainian community also commemorated a historical event – the 100th anniversary of the unification of the Ukrainian National Republic and the Western Ukrainian Republic into one independent state.

To mark this significant occasion, Michael Sawkiw, executive vice-president of the Ukrainian Congress Committee of America (UCCA), and Natalia Lokatur, Head of the Department for International Relations of Precarpathian National University in Ivano-Frankivsk, spoke about the importance of the proclamation of unification and the effect it had on the future of Ukraine and its people. Mr. Sawkiw spoke in English, and Ms. Lokatur in Ukrainian.

The program, which was presented by the Ukrainian Culture Center and the Ukrainian Art Center of Los Angeles, was directed by Victoria Kuzina and Asya Gorska. The masters of ceremonies Ms. Kuzina (in Ukrainian) and Maxim Kuzin (in English) moved the program along graciously and informatively. The stage was decorated beautifully by Elizabeth Yemetz and Victor Mokohonenko with the words “One Nation Independent” in blue and yellow, and surrounded by large-sized brilliant red poppies and luscious green leaves.

In addition, the audience was treated to a magical array of artwork by the renowned artist Ola Rondiak that was skillfully exhibited on the walls of the Ukrainian Culture Center. Daria Chaikovsky, president of the Ukrainian Art Center, introduced Ola Rondiak, noting that because Ms. Rondiak’s artwork was so much in demand, it took her center over two years to bring the exhibit to southern California.

Ms. Rondiak, who was born in the United States but has made her home in Kyiv since 1995, brought with her 30 pieces of contemporary female portraits. As she explained in her presentation, “the female image has become a metaphor for Ukraine, as it portrays a courageous, free and determined spirit.” Some of the themes on display were, “Vinok,” “Revolution of Dignity,” “Behind the Lines” and “Identity, Interrupted.” Through her iconographic portrayal of women, whether in collages, oils or sculptures, Ms. Rondiak aims to bring truth to the forefront.

The program opened with a prayer led by clergy of the Ukrainian Catholic and Ukrainian Orthodox Churches, followed by the American and Ukrainian national anthems sung by the very talented teenager Margaryta Kuzina.

The Chervona Kalyna dance group then performed an exquisite rendition of the traditional “Welcome Dance.” Later in the program, the group performed “Young Kozaks,” “Vahylya” and “Kolomyika.” Other performances included a piano solo, “Music of Sorrow,” composed and played by Laryssa Kulchytska; songs by Asya Gorska, Margaryta Kuzina, Oksana Kvitka; and a poem titled “Ukraina” composed by Vilen Chernyak and recited by Halyna Stanyk. The young brothers Oleksiy and Pavlo Kryshchenko from the School of Ukrainian Studies Shkola treated the audience to a humorous parody “Hrytzko’s Science,” which brought many laughs and applause from the audience. Olenka Kasperska, a teen who has already mastered the violin, performed a soulful interpretation solo of “I Will Go to the Distant Mountains.”

The celebration ended with a finale with all participants on stage as Ms. Gorska performed the well-known and beloved song “My Ukraine.” All were rewarded with a hearty applause and standing ovation.