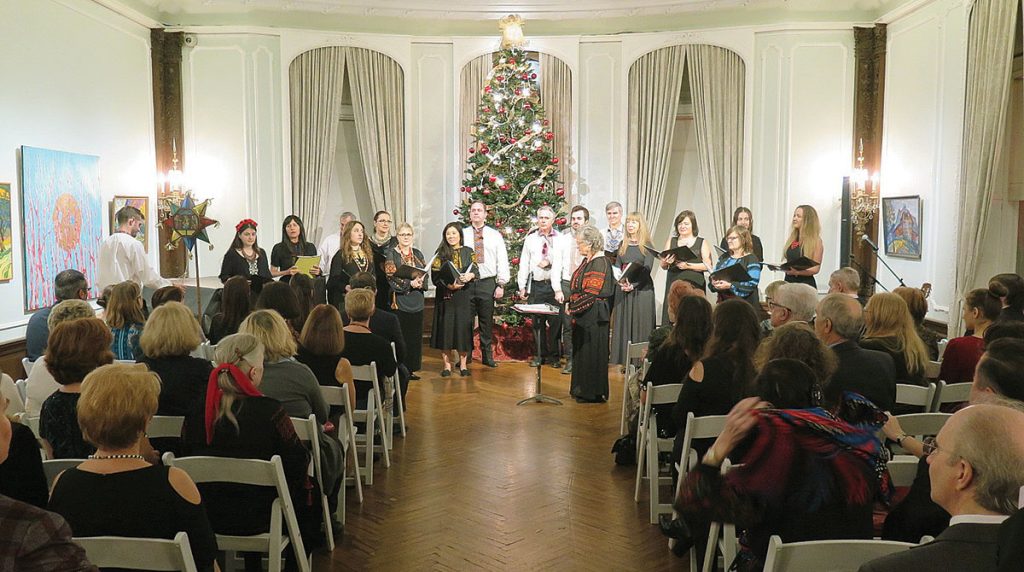 Ukrainian Engineers’ Society of America – NYC Chapter
The Promin Vocal Ensemble performs during the “Yalynka” held at the Ukrainian Institute of America.

The evening began with warm greetings provided by UESA New York City Board member Ivan Durbak. It was followed by a musical program provided by vocal group Promin. The Promin Vocal Ensemble was founded in 1972 by conductor, vocalist, musician and arranger Bohdanna Wolansky and has performed at such prominent venues as Lincoln Center, Carnegie Hall, the United Nations in New York, and Harvard University in Cambridge, Mass. The ensemble has a passion for good music and Ukrainian song.

After about an hourlong performance of traditional Ukrainian Christmas carols, Natalie Trojan, the treasurer of the Ukrainian Institute of America, thanked everyone for coming and highlighted the many years of mutual support among the sponsoring organizations.

The first portion of the night concluded with greetings from the president of the New York City Chapter of the Ukrainian Engineers Society of America, Marco Shmerykowsky. Mr. Shmerykowsky thanked both the evening’s guests and sponsoring organizations. He also took the opportunity to note that events such as the Yalynka are dependent on the volunteer efforts of community members and that the continued viability of such events is dependent on people joining the sponsoring organizations and contributing their time. (Happily, several people inquired about membership throughout the evening.)

After the closing remarks were concluded, the evening’s guests were invited to enjoy the hors oeuvres and refreshments. The food was once again catered by Lisa Krawec of the Yonkers Miasarnia. The Krawec family has been preparing excellent and varied menus for various New York City UESA Chapter events for many years.

As the night continued, the UIA hall continued to fill up as professionals, young and old, arrived together with their family and friends. New friendships and connections were made and old ones were reinvigorated.