Candidate sees herself as a warrior for New York communities 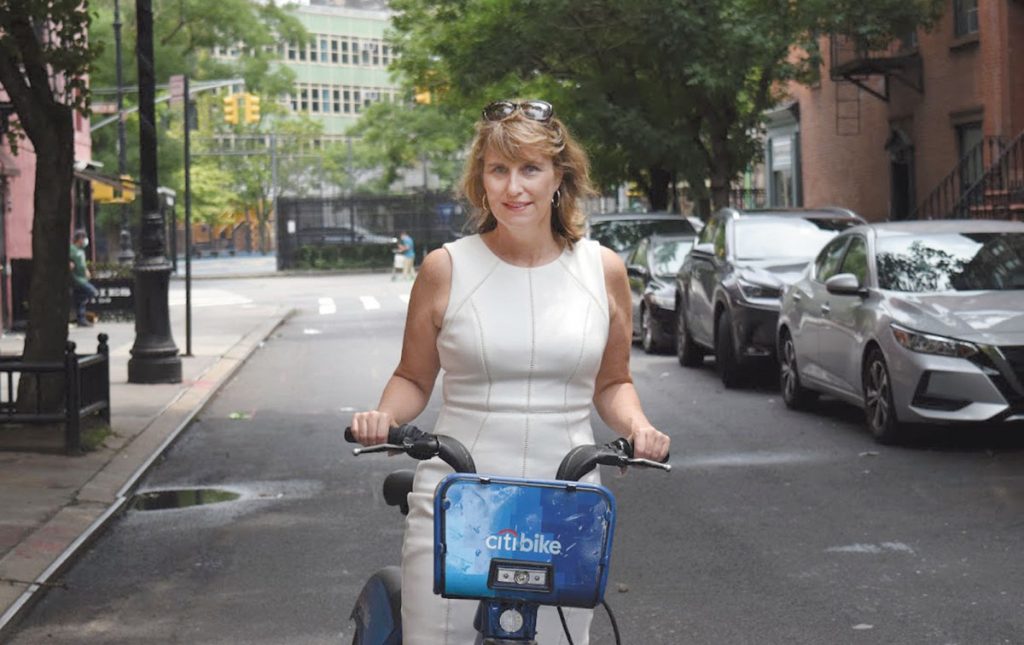 NEW YORK – This November marks the first time a Ukrainian American, Tamara Lashchyk, will be on the ballot for New York State Assembly in the crucial Manhattan District 66. Ms. Lashchyk was born in the Big Apple and currently resides in Soho. A veteran of over 26 years on Wall Street, she is passionate about her birthplace and people. Over several interviews, exclusively for The Ukrainian Weekly, Ms. Lashchyk detailed her vision and remedies for New York, stressing the importance of this election – especially for the Ukrainian American community.

Always riding her rented Citi Bike, Ms. Lashchyk is a familiar sight throughout her district, which extends south from 14th Street to include the East and West Villages, Tribeca and Soho. Daily, she hears the residents’ primary concerns: jump-starting small businesses and restaurants, crime and safety. During COVID, she continues visiting hospitals to support doctors and staff, thanking them for their bravery.

In her current job as a career coach, she is devoted to helping anyone succeed, and believes our country offers opportunities for all, saying, “We don’t teach how to become successful, nor how to manage money. I show people how to harness their ambitions and develop the right strategy to achieve their dream career.”

This passion to help others was always central to her life. After a successful career in financial services with major firms like J. P. Morgan, Merrill Lynch, Bank of America and Deutsche Bank, Ms. Lashchyk composed her highly praised book “Lose the Gum: a Survival Guide for Women on Wall Street.” The author stated, “Helping women advance has always been a passion of mine and the inspiration for my book. I was even recognized by winning the Woman of Wall Street Award. I will make advocacy for women more of a priority for the GOP, after I am elected.”

Running on the Republican ticket, Ms. Lashchyk realizes that ultimately, we all want the same things and can find common ground – and not get hung up on labels. At heart, her platform is bipartisan: core economic issues and safety for the community. A Republican since age 18, she says those who know her well understand she is pragmatic and balanced.

Ms. Lashchyk elaborated, “As a moderate Republican, I find more in common with moderate Democrats than with the right wing of my own party. Although I lean right, my views are diverse, and on certain issues, particularly social ones, they lean left. I’ve spoken to many Democrats and liberals, and if they listen with an open mind, they also support my views. I know the Republican Party is not perfect, and I want to help reform it. We should narrow the gap between parties to accomplish more – and avoid gridlock.”

In today’s extreme political climate, absence of civil discourse often introduces animosity, affecting even family members. Ms. Lashchyk explained, “I personally don’t want everyone to think like me, because diversity of thought brings about the greatest innovation. I do, however, want to be shown respect for my views and not be told that my opinion is wrong – I extend this same courtesy to others.”

New York faces grave consequences not only from the COVID pandemic, but also from a looming economic disaster, the flight of residents and a spike in violent crime.

According to a grim report by The Partnership of New York City, one third of the city’s 230,000 small business may never reopen again, and only 40 percent of Manhattan’s office workers will return by year’s end. With the exodus of tens of thousands of affluent city dwellers, the combined wealth in the Big Apple dropped by $336 billion in the 12 months ending June 30.

After the politically motivated disbanding of the New York Police Department’s anti-crime unit in June, gun violence exploded with a shocking 205 percent increase. This was the bloodiest June in 24 years, accompanied by huge leaps in murder, burglary and auto theft crimes. The American Legislative Council named New York the worst state in the U.S. for its economic outlook, with New York City seeing people “fleeing the city.”

Ms. Lashchyk is confident her skills and experience make her best qualified to help New York at this critical time, because she has been part of every crisis task force, including 9/11 and the financial crisis. Reopening small businesses and restaurants to capacity is her top priority.

Ms. Lashchyk believes they can flourish again, “but not under the policies of the current administration and not with elected officials who don’t understand business and economics. The policies of both Mayor [Bill] de Blasio and Gov. [Andrew] Cuomo are killing small businesses. Either they have no understanding, or they’re intentionally trying to ruin the city. I truly question their motives.”

Both city and state are bloated bureaucracies, with a great deal of mismanagement, says Ms. Lashchyk, and she pledges to eliminate red tape, and fight graft and corruption in Albany.

The world’s greatest city cannot wait another 10 years before its issues are fixed. Ms. Lashchyk asserts that the current governor is showboating and together with the mayor is playing politics, instead of addressing the issues. For example, she was “appalled to see the governor’s overreach through Executive Order – banning the use of a highly politicized drug for COVID-19. Medical decisions should always be between you and your doctor.”

As she puts it, “Their inept decisions are neither lucid, nor coherent – and they seem to be politically motivated. People are dying as a result. This is unconscionable. I myself know more people who’ve died of COVID-19 than I knew who died in 9/11. Two of my friends’ parents died as a result of Gov. Cuomo’s nursing home debacle. It’s one thing to hear talking points, it’s another when you know someone who’s been personally impacted.”

As regards crime and safety, Ms. Lashchyk said, “It’s heartbreaking to see a return to the 1970s, when increasing crime signaled a rapid downward spiral for New York. People should feel and be safe. Current policies aren’t working. You can feel how violent crime is on the rise. In the last months, a menacing tone has permeated our community, especially in East Village. I myself worry about the safety of my older relatives.”

She pledges her full support for the police, and will advocate for the needs of all residents against “progressive” crime bills.

Looking ahead, Ms. Lashchyk predicts a dramatic shift in industries. Financial corporations don’t plan to bring back their employees until 2021. Many realize they won’t need to be in New York at all. New sectors may come in, she says, if they are incentivized them properly. Talented people will transform Manhattan into a vast technological nexus.

Her goal is to focus on one particular sector: robotics. She explained: “If we truly pursue a de-coupling strategy from China and bring manufacturing jobs back to the U.S., we will need to advance in this technology. I want New York to become the Robotics Capital of the World by attracting tech talent to the city, and manufacturing capabilities to upstate. This would be a win-win all around.”

In the overwhelmingly Democratic District 66, Deborah Glick has been the representative in the State Assembly for 28 years (and so far refuses to debate Tamara Lashchyk). Ms. Glick is openly gay and accentuates her Jewish identity on social media; the district has a very large concentration of both groups.

Regarding her own political ambitions, Ms. Lashchyk explained that she didn’t seek this nomination, but was asked to run by the Manhattan GOP, who were impressed with her ideas, political acumen and business qualifications. “I was chosen to run, and I felt it was my duty to serve my community,” she states.

In 2018, only 45,000 of 132,000 District 66 constituents voted. Ukrainian voters can definitely make a difference. And it would certainly be good to have someone in office represent their interests. Over the years, Ukrainian immigrants brought their strong sense of family, faith and traditions, work ethics, and community values. But it’s also important to learn from our history.

Ms. Lashchyk explained that Ukrainians who lived through World War II draw parallels from Soviet times to what they are seeing today in the U.S. They now recognize media propaganda pushing a narrative that simply isn’t true – because they see differently with their own eyes.

Closing our churches during a global pandemic reminds them of how religion was forbidden under Communism, she comments. During COVID, they’ve been slipping into church through a side door, while closed front gates gave an appearance of compliance. This parallel is chilling.

Summing up, Ms. Lashchyk said, “Freedom of speech was not permitted under the Soviets, and now we experience that too. Older Ukrainians are alarmed by the similarities and worry Communism is coming to America. We need to be vigilant and protect our rights and freedoms, and never take them for granted.”

Ms. Lashchyk is eager and confident in her campaign to help save New York. She declared: “I do love this country and, as a world traveler, the best part of every overseas trip is always when the pilot announces: ‘Welcome to the United States.’ This always fills my heart with warmth. America is my home and I will always protect and defend it.”

“I’m a warrior destined to defend our freedoms and I am 100 percent confident I will win this election!”