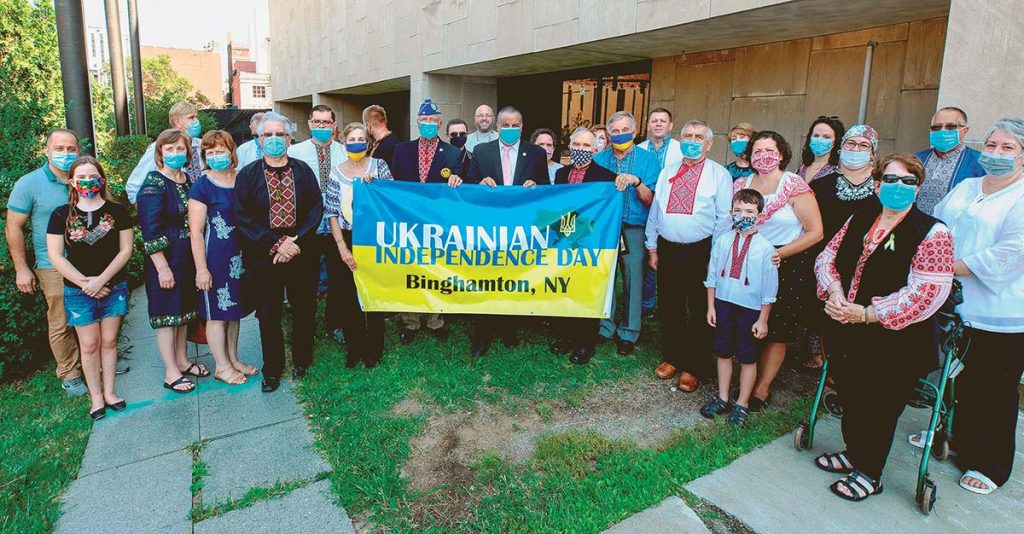 Serhij Pechenyy
During the observance of Ukrainian Independence Day at City Hall in Binghamton, N.Y.

Stephan Wasylko emceed this year’s program , and he opened by introducing the Rev. Teodor Czabala, pastor of Sacred Heart Ukrainian Catholic Church, and the Rev. Ivan Synevsky of St. John the Baptist Ukrainian Orthodox Church to deliver remarks and prayers. The pastors reminded all of the power of prayer and called for support for the wounded and the families of Ukrainians killed while defending Ukraine against the Russian aggressor.

Mayor Richard C. David presented the signed Ukrainian Independence Day proclamation to Lubomyr Zobniw, chairman of the UCCA Binghamton Branch. Mayor David has been connected with this event for almost 20 years, first as deputy mayor and then as mayor Taras Stets gave the historical commentary titled “Restoration of Ukrainian Independence Day.” Among his key points were these: During the Russian tsars’ conquests of Ukraine, Ukrainians were forced into serfdom, and their language and culture were banned. Among the worst crimes against humanity is Joseph Stalin’s 1932-1933 Holodomor, the forced starvation of over 7 million Ukrainian farmers and their families. Stalin also executed Ukrainian intellectuals and implemented policies to eradicate Ukrainian culture and language within the USSR. Ukraine gave up the world’s third largest nuclear weapons stockpile for territorial integrity guarantees outlined in the Budapest Memorandum of 1994. Mr. Stets concluded by stating: It is time to aid Ukraine with defensive arms and to demonstrate support for Ukraine’s independence, sovereignty and territorial integrity.

Stephan Wasylko introduced two brothers, Nazar and Markiyan Dmyterko, from Ukraine who are currently studying at St. Basil Seminary in Stamford, Conn. The two sang the Ukrainian-language “Prayer for Ukraine,” which is considered the spiritual anthem of Ukraine.

After elaborating on the ongoing war in eastern Ukraine and the thousands killed, Mr. Wasylko introduced Vitali Ilchishin, who spoke about the mission of the Together for Ukraine Foundation, which helps provide support for Ukrainian war victims. Mr. Ilchishin detailed the organization’s activities, including travel to Ukraine to assist wounded warriors.

Mr. Wasylko then introduced Michael Dobransky, commander of Ukrainian American Veterans Post 43, who highlighted the UAV’s activities to help the wounded in Ukraine.

After the “Pledge of Allegiance,” as the children assisted Mayor David in raising the Ukrainian flag above City Hall, participants sang the Ukrainian national anthem. Participants then gathered for a group picture. Due to coronavirus-related restrictions and social distancing, there were few opportunities to admire each other’s embroidery or to speak with reporters from the three TV stations covering the event: Channels 12 and 34, and Fox TV.