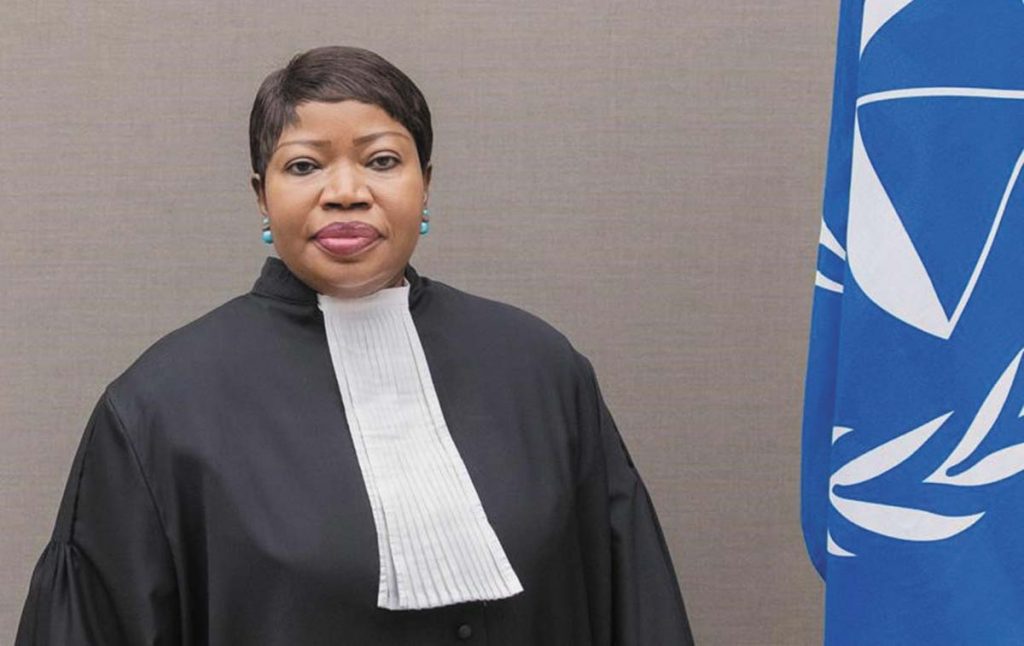 KYIV – Ukraine reached another legal breakthrough on the world arena in its efforts to hold Russia accountable for war mongering and human rights abuses in the country when the International Criminal Court (ICC) on December 11 decided to recommend a full-fledged probe.

ICC Prosecutor Fatou Bensouda said there was enough evidence to “believe that a broad range of conduct constituting war crimes and crimes against humanity” have occurred and, therefore, warrant further investigation by the court.

The key findings came after the court’s six-year preliminary examination, which was mostly based on Ukraine providing “detailed information” on events that encompass the pro-democracy Euro-Maidan protests that erupted in November 2013, Russia’s illegal annexation of Ukraine’s Crimean peninsula in early 2014 and its covert invasion of the two easternmost regions of Luhansk and Donetsk.

The next step, the prosecutor said, is to “request authorization from the judges of the Pre-Trial Chamber of the court to open an investigation.”

Writing on Twitter on December 11, Ukrainian Foreign Affairs Minister Dmytro Kuleba described the news as a “historic decision,” saying that “international justice is not quick, but inevitable.”

The ICC’s probe focused on alleged transgressions that include genocide, aggression, war crimes and crimes against humanity committed by individuals, not countries.

“The day will come when Russian criminals will certainly appear before the court,” Mr. Kuleba said.

Neither Ukraine nor Russia are members of the ICC. However, Ukraine has stated in 2014 and 2015 that it will accept the court’s jurisdiction in the Donbas war and Russia’s annexation of Crimea.

Russia does not acknowledge the ICC’s jurisdiction.

Moscow has denied involvement in Ukraine’s internal affairs and justified its seizure of the Crimean peninsula as “historic justice.” Russian President Vladimir Putin and other high-level Kremlin officials have persistently denied the involvement of the Russian military in the Donbas despite overwhelming evidence to the contrary.

To date, more than 13,000 people have died in the war and more than 1 million people have been internally displaced in a conflict that is simmering in its seventh year.

A report concluded in February by the United Nation’s High Commissioner for Human Rights on Ukraine found abuses of Ukrainian detainees in the Donbas where Russian-led forces control about 3 percent of the territory.

Referring to the notorious “Isolation” prison in the occupied city of Donetsk, the report found evidence of “beating, suffocation, sexual violence, torture by position, extraction of body parts (fingernails and teeth), deprivation of water, food, sleep, and access to toilet facilities, simulated execution, threats of violence or death, and threats to harm the families of the prisoners….”

A number of militants fighting against Kyiv have told Ukrainian media of actions that constitute war crimes. In 2015, Arseniy Pavlov, better known as Motorola and who was a high-ranking Russian fighting alongside separatist forces, said he executed prisoners of war and tortured other prisoners.

The Russian warlord was killed in an explosion inside an elevator of the residential building where he lived in Donetsk Oblast four years ago.

Igor Strelkov, a Muscovite and former Russian intelligence officer, has been identified as one of about nine men who served in so-called military tribunals and carried out several executions in Slovyansk, Donetsk Oblast. He has given interviews to Russian and Ukrainian media stating that he had committed actions based on a draconian law conceived by dictator Josef Stalin and imposed shortly after Germany invaded the Soviet Union in World War II, according to reporting by Radio Free Europe/Radio Liberty.

Mykhailo Tolstykh, a Ukrainian national whose nom de guerre was Givi, is perhaps the most identifiable perpetrator of war crimes in Ukraine, according to the Kharkiv Human Rights Protection Group (KHPG).

Mr. Tolstykh has been filmed torturing Ukrainian prisoners of war, in particular during the siege of the Donetsk airport. The battalion commander was killed in his office in occupied Donetsk in February 2017.

Two hundred fifty-one Ukrainians are currently held in captivity in the occupied part of Donbas, Ukrainian ombudswoman Lyudmyla Denisova said this week during a meeting with British Ambassador Melinda Simmons.

Separately, the ICC’s statement means that it “raises the chances that Moscow and those in Russia implicated in war crimes and crimes against humanity can be held to account,” the Kharkiv Human Rights Protection Group (KHPG) said in a statement.

For their belligerence over the occupation of Crimea and aggression in the Donbas, Russian entities and individuals have faced sanctions imposed by the U.S., the European Union and other countries.

On December 16, the EU extended for another six months sanctions against Russia for its occupation of Crimea and actions in the Donbas. Those sanctions target Russian financial, energy and defense industries and restrict Moscow’s access to certain sensitive technologies and services that can be used for oil exploration and production.

Already in 2016, the prosecutor’s office of the ICC designated the war in Ukraine as an “international armed conflict,” with Ukraine on one side of the war and Russia on the other side.  The conflict, therefore, falls within the court’s jurisdiction.

Kyiv furthermore has made headway in other international courts and arbitration suits against Russia. Namely, with the U.N.’s International Court of Justice and the International Tribunal on the Law and the Sea. Ukraine’s state-owned Naftogaz oil and gas company has also won lawsuits in its favor against Russia.

Less than three weeks ago, the European Court of Human Rights (ECHR) also announced that it was merging two cases related to Ukraine and Russia – one on Russia’s aggression in the Donbas and the other a case the Netherlands initiated against Russia over the Malaysian Airlines disaster in 2014 when all 298 people aboard flight MH17 were killed.

Ukraine’s case against Russia regarding eastern Ukraine pertains “to Russia’s de facto control over the illegal armed formation and so-called ‘separatists’ in part of the Donetsk and Luhansk oblast,” the KHPG said in its statement.

Allegations include “civilian and military deaths as the result of force by armed groups controlled by Russia…torture and ill-treatment of civilians and prisoners of war…severe curtailment of the right to freedom of expression in occupied Donbas,” the KHPG said in its statement.

The ECHR is also presiding over a separate case on Crimea, and that case is nearing a ruling by the court.

This week Ukraine’s Parliament adopted a budget for next year that envisions defense and security spending of roughly $9.2 billion, or 5.8 percent of the forecasted output of the economy. It exceeds NATO’s target of spending 2 percent of gross domestic product for member countries.

Additionally, the U.S. Congress last week passed a bipartisan defense spending bill for the 2021 fiscal year that includes $250 million in security assistance for Ukraine to fund additional training, lethal and non-lethal equipment, and advisory efforts for Ukraine’s military. Roughly a third of that is designated specifically for lethal assistance, an increase of $25 million from the previous year.

The ICC’s investigation could take between 3 to 10 years to complete, two international legal experts told the Ukrainian service of Radio Free Europe/Radio Liberty. Those experts are Borys Babyn, who holds a Ph.D. in legal studies and is a former presidential representative to Crimea, and Volodymyr Vasylenko, who was a judge in the International Criminal Tribunal for the former Yugoslavia in 2002-2005.