Ukrainian station in Antarctica marks 25 years since its founding 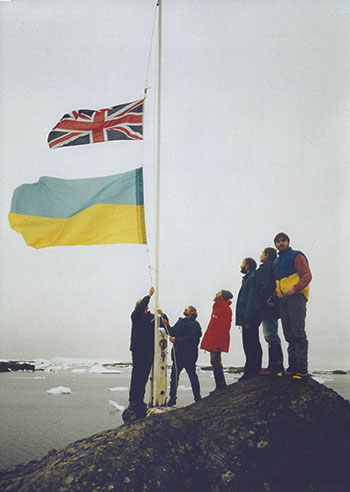 National Antarctic Research Center
The Ukrainian flag replaces the flag of the United Kingdom at the Antarctic base on February 6, 1996.

Twenty-five years ago, the United Kingdom handed over its Antarctic research station to Ukraine. On February 6, 1996, the Union Jack was replaced by the blue-and-yellow Ukrainian flag and the British Faraday station became the Aca­demician Volodymyr Vernadsky Station, named after the renown Ukrainian geochemist, mineralogist and crystallographer.

Celebrations on the 25th anniversary of this historic event included museum exhibitions, the creation of a post stamp, presentation of state awards, the premiere of a music video, and the first live video call between Vernadsky Station and the Ukrainian president.
Vernadsky Station is the only Ukrainian research base in Antarctica. It operates year-round and its primary purpose is to carry out scientific research on climate change, the ozone hole, animals’ and plants’ responses to climate change, among other topics.

“Every great story is first and foremost about the people who made it possible. I thank the representatives of the Ukrainian polar community present here, as well as all those who worked at the Vernadsky Station in different years,” said President Volodymyr Zelenskyy during an official reception to mark the anniversary.

“I believe that the history of Vernadsky, the history of ‘Ukrainian Antarctica’ will be continued and will be successful,” said Mr. Zelenskyy, who also presented state awards to the polar scientists.

Director of the National Antarctic Research Center of Ukraine Yevhen Dykyy thanked the president for his assurances of further support from the state for its most remote outpost on the planet, located 15,000 kilometers (9320 miles) from home.

In the 1990s, the United Kingdom built a new station 191 miles south of Faraday Antarctic base, so they decided not to keep two in the same region. Dismantling the station, as required by the Antarctic Treaty, was much more expensive than selling or gifting it to another nation.

The U.K. chose Ukraine primarily because the young, independent nation had a developed post-USSR scientific base and scientists capable of continuing the British research at Faraday, which included hydrometeorological observations, geophysical research, ozone layer studies, magnetism, etc. According to the memorandum on the station’s transfer, the Ukrainian side undertook the transfer of data on these research areas to the British Antarctic Service within ten years.

“With the transmittal of a brief, formal letter of acceptance to the United Kingdom, Ukraine officially renewed its long-standing tradition of Antarctic research,” The Ukrainian Weekly reported on December 25, 1994. The following year Ukrainians were preparing to set foot in their new station. The first expedition was partly funded from the state budget and partly by the International Renaissance Foundation with significant involvement of prominent Ukrainian economist Bohdan Hawrylyshyn, who was then the head of the foundation.

Ambassador of the United Kingdom to Ukraine Melinda Simmons noted that she was delighted to represent her country at the celebration of the 25th anniversary of the British Faraday station’s transfer to Ukraine.

“This decision symbolizes our real support of scientists of already independent Ukraine. However, we know that Ukrainian scientists worked in Antarctica long before that as part of Soviet missions. Therefore, we are glad that Britain has played a role in returning Ukraine to the group of countries studying this continent. Antarctica is of great importance to the planet. All countries must strongly counteract global warming to protect and preserve it for future generations. Taking this opportunity, I congratulate all of us, especially Ukrainian polar explorers, on this milestone,” Ms. Simmons said.

The Ukrainian National Antarctic Research Center opened several exhibitions to mark the anniversary. One of these is Window to Antarctica and is housed in the National Museum of History of Ukraine. The first flag, which was lifted at the station, is on display along with other artifacts from the first Ukrainian Antarctic expeditions, including scientific and household appliances.

UkrPoshta (the national Ukrainian postal service) issued a specially designed envelope and stamp. The stamps depict the station and are printed with the inscription “Vernadsky” along with palm trees and the victory sign.

“Ukraine celebrates 25 years of receiving the Antarctic station, and UkrPoshta celebrates 25 years of having the most remote post office on the coldest continent. And for the fourth time, the Vernadsky Station will be depicted on Ukrainian philatelic products. We present an envelope dedicated to this important state and scientific date,” said General Director of UkrPoshta Ihor Smilyansky.

The station has a special branch of UkrPoshta, from where you can send a postcard to any corner of the world. “It is quite popular among tourists who before the pandemic constantly visited our station – up to 5,000 people in a few months of Antarctic summer. We hope that the COVID-19 crisis will soon pass, and letters in new envelopes with exclusive stamps will be sent to dozens of countries,” said Yevhen Dykyi, director of the National Antarctic Research Center.

Ukrainian singer Postman (real name Konstyantyn Pochtar) released the song Antarctica dedicated to the Ukrainian research base. This is a joint project of the musician with the National Antarctic Research Center. The music video for the song is created from videos taken by Ukrainian polar explorers during expeditions.

Mr. Pochtar noted that “Antarctica is a song about isolation, written during the first lockdown. I have been following the Vernadsky Station’s activities for a long time, and I am pleased with the news from there. I want more people to learn about its existence both in Ukraine and abroad. When I wrote the song, I sent it in a message to the National Academy of Sciences. The polar explorers liked it, and we agreed to make a video together. Now everyone can see these stunning landscapes, our polar explorers and the station accompanied by a very thematic song,” Mr. Pochtar said.

“We are grateful to Postman for such a creative collaboration, a great music video, and a touching song. It is a wonderful gift for the 25th anniversary of the station,” said Mr. Dykyy, the director of the National Antarctic Research Center.

On February 6, for the first time in history, Ukraine’s president had a live conversation with polar explorers working at Vernadsky research base.

“Thank you for doing a great job and for making a Ukrainian contribution to world history. I want to congratulate you on the great anniversary – the 25th anniversary of the Ukrainian station’s founding. It is a great honor for me to talk to you live. You do a lot of daily work to develop science. And we, for our part, want and will support each of you,” Mr. Zelenskyy said in a video call.

Twenty-five years ago, the only way to communicate with Ukraine was via satellite communication. Polar explorers had a chance to talk with their families only once a month and only for five minutes because the cost of such communication was very high. One minute of a call cost $12, while the average salary in Ukraine at the time was $10 per month.

“Here, in Antarctica, we see global warming with our own eyes. It is happening very fast here,” said Chief of the 25th Ukrainian Antarctic expedition Yuri Otruba.

“Also, here, at the Vernadsky Research Base, a dangerous phenomenon known as the hole in the ozone was detected. Here, we are the first in the world to measure the recovery of the ozone layer. From Antarctica, it is seen that our planet is small, in fact.

Despite all disputes, humanity must overcome common challenges, such as climate change and pandemic, jointly. We are thrilled that due to the Vernadsky Station, we, Ukrainians, are directly involved in such global efforts of humanity to help save our planet,” Mr. Otruba said.