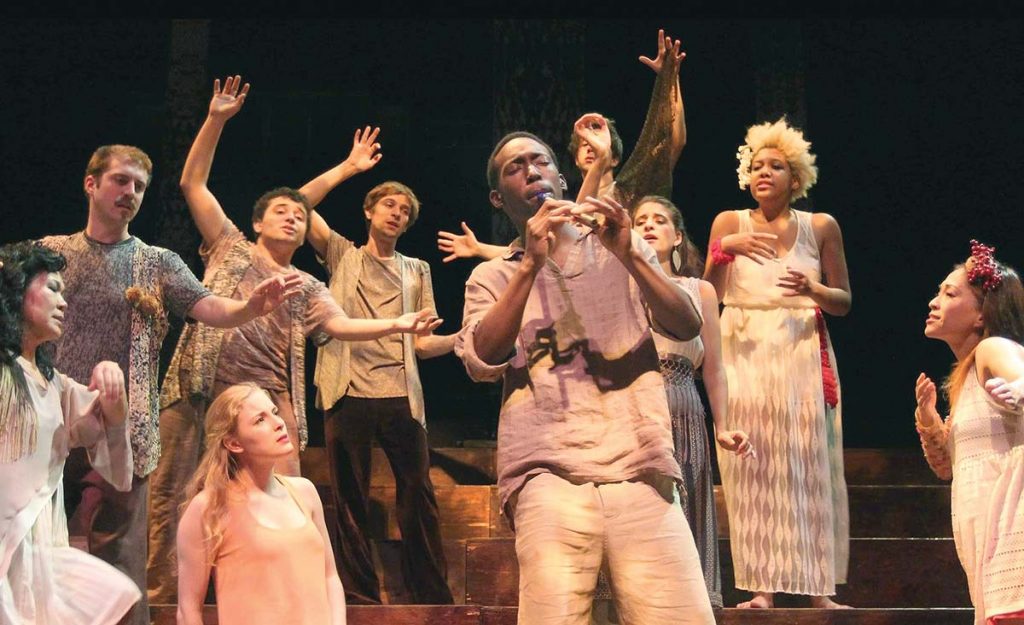 Courtesy of UNWLA, Branch 113
Members of the Yara Arts ensemble under the direction of Virlana Tkacz are seen during performances of three new interpretations of “The Forest Song” by Lesia Ukrainka.

NEW YORK – The Ukrainian National Women’s League of America, Branch 113 located in New York City, hosted a virtual meeting with Virlana Tkacz, founding director of the Yara Arts Group at the La MaMa Experimental Theater. The event, part of the celebration of the 150th anniversary of Lesia Ukrainka’s birthday, was dedicated to three new interpretations of “The Forest Song” by the Yara Arts ensemble under the direction of Ms. Tkacz.

In 1993, Ms. Tkacz, together with Wanda Phipps, translated “The Forest Song” from Ukrainian into English and received the National Theater Translation Fund Award of the Year.

Using the translation, Ms. Tkacz created several theater pieces based on this drama. First presented were the creative workshops at La MaMa and at Bucknell Univer­sity. Then, a bilingual play “Yara’s Forest Song” was staged at the Les Kurbas Theater in Lviv, and at La MaMa in New York (1994).

Ms. Tkacz illustrated her presentation with many photos, interesting videos and music from live performances.

Responding to questions, Ms. Tkacz confirmed that the audience reaction, both in Lviv and New York, was very positive. She mentioned that she is fascinated by works of classical Ukrainian literature, for example those of Lesia Ukrainka because “the text is timeless and can have many interpretations,” Ms. Tkacz said.

For example, her protagonist Mavka and the other fairy creatures appear in the cold, sterile landscape of New York City skyscrapers, instead of the lush, green forests of Volyn, Ukraine.

Branch 113 and the audience who gathered on May 13 enjoyed meeting Ms. Tkacz. They were reminded of the beauty of Lesia Ukrainka’s original work, “The Forest Song,” and its relevance to eternal themes: the mystery of love, and tragedy of betrayal of oneself and the consequences of modern alienation from nature.