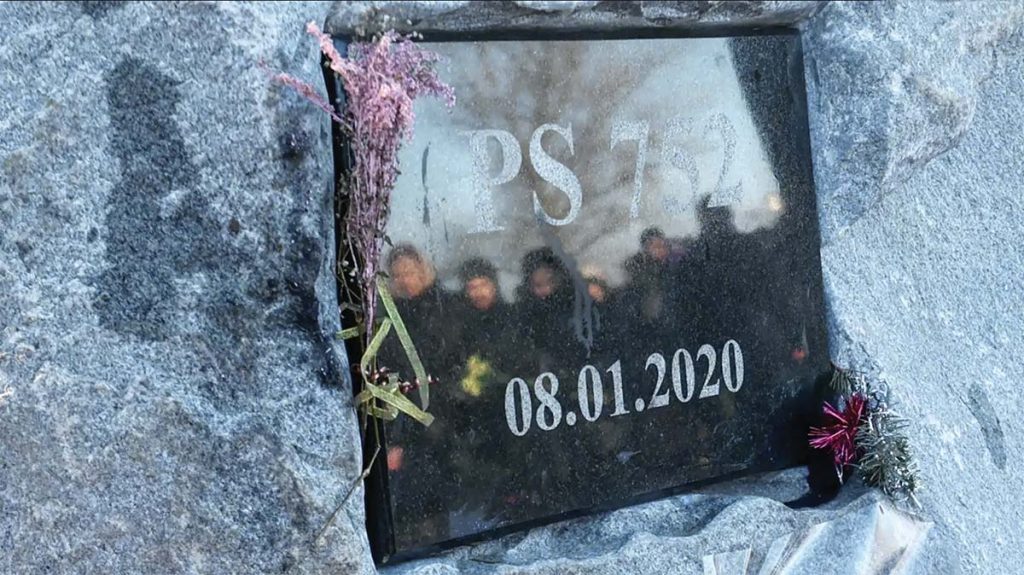 Serhii Nuzhnenko, RFE/RL
Individuals gathered on January 8 at a stone monument in Kyiv’s Boryspil International Airport to commemorate the second anniversary of the downing of Ukraine International Airlines flight PS752.

LVIV – The secretary of Ukraine’s National Defense and Security Council (NDSC) has called the downing of Ukraine International Airlines flight PS752 in 2020 an act of terrorism perpetrated by the Iranian military.

“What happened on January 8, 2020, was a terrorist act committed against a civilian aircraft,” Oleksiy Danilov, the NDSC secretary, said during an interview on December 5 with Voice of America (VOA).

Mr. Danilov expressed disappointment that Iran has refused to cooperate with an investigation of the tragedy and that Iran will not pay reparations to the victims of the tragedy.

Iran has acknowledged that missiles fired by its military struck flight PS752, killing all 176 people on board, but it has maintained that the firing was accidental.  The Iranian government previously put the blame on Iranian soldiers who operated the missile system. They also pinned part of the blame on what they said was a misaligned air defense system.

In his remarks, Mr. Danilov said Iranian authorities allowed other civilian aircraft to fly both before and after missiles struck flight PS752.

“We have the impression that the Iranians had been waiting specifically for our plane. We can assume this,” Mr. Danilov said.

He added that senior Iranian officials were allegedly waiting to strike the UIA passenger plane.

“It must have been an order from senior management,” Mr. Danilov said. “No air defense operators can make such a decision on their own.”

Canadian officials said in June of last year that they found no evidence the Iranian military planned to shoot down the passenger plane.

Ukraine’s former deputy prosecutor general, Gyunduz Mamedov, in an email exchange with VOA on December 7, said he believed the tragedy was an act of terrorism, or perhaps worse.

“The pre-trial investigation is considering various categories of crime, including an act of terrorism,” Mr. Mamedov said, according to the VOA. “It also is likely that the downing of an aircraft will be classified as a war crime.”

A Canadian court on December 31 ruled to award more than $84 million to the families of six of the victims.

Iran initially said it would meet with countries whose nationals died in the tragedy, but on January 7 Iranian officials issued a statement saying they would hold only bilateral meetings to discuss compensation for the victims’ families.

That statement was followed by a joint announcement from Sweden, Britain, Canada and Ukraine which said they were abandoning efforts to negotiate with Iran over reparations for the victims of the crash.

The Ukrainian commercial airliner was shot down on January 8, 2020, soon after it took off from Iran’s capital, Tehran. The crash of UIA Flight 752 came just hours after Iran launched a ballistic-missile attack that targeted two bases in Iraq that housed U.S. forces. The attack was believed to be retaliation for the U.S. killing of Iranian Revolutionary Guard Corps commander Qassem Soleimani.

Iran at first denied responsibility for downing flight PS752, but Tehran later admitted that two of its missiles were fired “unintentionally” at the Ukrainian passenger plane.

On December 16, the International Coordination and Response Group for the victims of Flight PS752 issued a statement calling on Iran to join multilateral negotiations by January 5. Tehran ignored the request.

“Due to the apparent reluctance of the Islamic Republic of Iran to address this matter in a constructive and timely manner, our response to Iran indicates that they have until January 5 to confirm whether they are willing to engage in negotiations with the Coordination Group, after which we will have to assume that further attempts to negotiate reparations with Iran are futile. The Coordination Group will have to seriously consider other actions to resolve this matter within the framework of international law,” the groups December 16 statement said.

By January 6, the group had announced it was abandoning efforts to negotiate with Iran.

Ukraine’s Ministry of Foreign Affairs noted that Iran agreed to cooperate with the International Group during the first round of talks on July 30, 2020.

“Iran has now changed its position and strongly opposes any further negotiations related to our collective claim for compensation for the PS752 downing. As Iran has an international legal responsibility to the affected states, this issue should be discussed collectively to ensure fair and equal treatment of all victims of the tragedy,” the MFA statement said.

The group agreed on its commitment to hold Iran accountable “for the actions and omissions of its civilian and military officials that led to the illegal downing of PS752, and we will do our utmost to ensure full compensation for Iran’s violation of international law.”

The ambassador of the Islamic Republic of Iran to Ukraine, Manuchehr Moradi, said Iran, in turn, will not negotiate with the International Coordination and Response Group.  Moreover, the ambassador argued that the majority of the citizens on board the flight were Iranian.

“According to the Iranian statistics, of the 176 people killed in the disaster, 146 were Iranians, 11 were Ukrainians, 10 were Afghans, five were Canadians and four were Swedish citizens. In addition, when leaving the airport for boarding, only 30 people showed foreign passports, and the rest of the passengers boarded the plane with Iranian passports,” Mr. Moradi said.

According to the Iranian ambassador, the Islamic Republic of Iran does not recognize dual citizenship. As a result, the country considers people with dual citizenship to be Iranian citizens.

“In this regard, no British citizen is among the dead, as those whom Britain claims to be its citizens are legally Iranian citizens. Therefore, we cannot accept Britain’s presence in the coordination group. Therefore, the composition of the international coordination group is, in fact, questionable, and Britain’s presence in it is questionable,” Mr. Moradi said.

In a recent phone call, Ukrainian President Volodymyr Zelenskyy and Canadian Prime Minister Justin Trudeau agreed on the need to work together to obtain adequate compensation for the victims’ families of flight PS752.

During talks in Kyiv in June 2021, the Iranian delegation announced it was ready to pay $150,000 in compensation to Ukrainian families of those killed in the tragedy, but Ukraine rejected the offer.

A spokesman for Ukraine’s Foreign Affairs Ministry, Oleh Nikolenko, previously noted that the issue of compensation is an essential element in ensuring justice for the victims of the tragedy and their relatives.

Before determining the total compensation for the families of the victims, Mr. Nikolenko said it was important to establish the facts of the case and then hold accountable any individuals responsible for shooting down flight PS752.

“Only then can we talk about the amount of payment,” Mr. Nikolenko said. “The specific amount of compensation should be the result of an agreement between the governments of all of the states whose citizens died in the plane crash, and not a unilateral decision.”