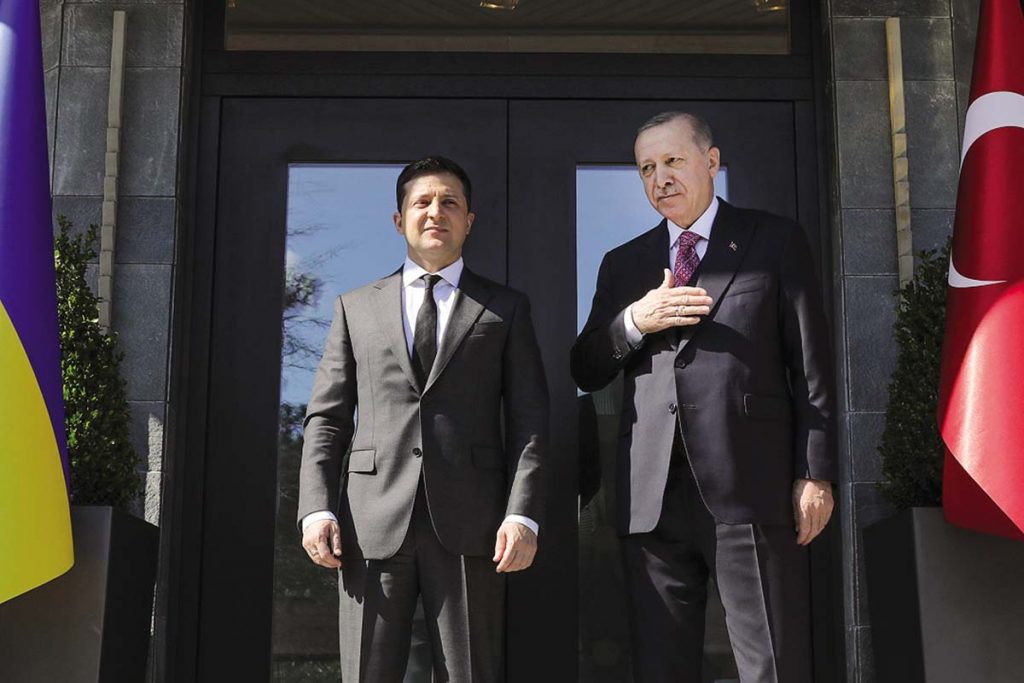 That language comes in lieu of the more fre­quently used “shuttle” diplomacy that he described as a Cold War relic during an online briefing with journalists on February 2.

As case in point, the heads of four governments – all NATO countries – visited Ukraine this week. Beyond showing solidarity in the face of ongoing Russian aggression, they came with either pledges or deliveries of financial assistance and defensive weapons. To the direct north, northwest and northeast, 100 kilometers from Ukraine’s borders, about 130,000 well-equipped Russian soldiers and weaponry sit stationed and ready.

He was succeeded by Mark Rutte, the prime minister of the Netherlands, whose government said it would help Ukraine form a team of cybersecurity experts. His foreign affairs minister, Wopke Hoekstra, previously said the Netherlands would look sympathetically at a request from Ukraine for a supply of defensive weapons.

And Recep Tayyip Erdogan, president of NATO member Turkey, was in Kyiv on February 3, having already sold battle-tested combat drones to Ukraine. He and Mr. Zelenskyy signed a free-trade agreement that has been negotiated since 2010 and which is expected to add 2 percent in economic growth to each country. And Ukrainian Defense Minister Oleksiy Reznikov also announced that both countries signed a framework agreement to manufacture Turkish drones in Ukraine.

Their visits are meant to coordinate positions “before and after all contacts with Russia,” to ensure “unity” and so that “Russia hears the same messages from all partners,” Ukraine’s top diplomat said.

A day after visiting Kyiv, Mr. Johnson told Russian President Vladimir Putin during a phone call that he would make a “tragic miscalculation” if Moscow forces make further incursions in Ukraine.

Mark Rutte, the prime minister of the Netherlands, stressed that “every effort must now be made to de-escalate” the situation, while adding that any further Russian move into Ukraine would trigger a “robust” package of Western sanctions.

A seventh planeload of U.S. defensive weapons landed in Kyiv on February 3, coinciding with the week-long diplomatic visits of support.

All of Kyiv’s interlocutors, starting with the White House, have foremost emphasized dialogue and diplomacy to diffuse the precarious security situation caused by Russia. Kyiv has numerous times been rejected by Moscow for bilateral or other platforms of talks to resolve the ongoing war and ease tension.

The latest beat of war drums started in April. Then, Russia amassed some 100,000 soldiers and military hardware near Ukraine. That force was in addition to the permanent forces Russia has stationed in the occupied parts of the Donbas and the Crimean Peninsula, which it forcibly seized in 2014 and which kicked off a war that has killed over 14,000 people.

Most of those troops were later withdrawn, but not the military infrastructure set in place at surrounding bases. In November, the soldiers – the easiest component of war to move – started to redeploy, the U.S. said alarmingly.

A month later, Moscow published two draft treaties addressed to NATO and Washington demanding the defense alliance cease all cooperation with Ukraine, including the supply of weapons.

Those and other demands to dismantle NATO’s security architecture, were preceded in July by a 7,000-word diatribe about Ukraine authored by Mr. Putin. Its contents questioned Ukraine’s right to sovereignty and insisted that Russians and Ukrainians are “one nation.”

Mr. Kuleba dismissed the Kremlin’s demands as a red herring. Apart from being a nuclear-armed country with Europe’s largest standing army, Russia, according to the foreign affairs minister, was never worried about the growth of NATO or the size of European members’ armies, whose combined size are smaller than Russia’s.

When Russia invaded Ukraine in 2014, he noted, Kyiv’s official foreign policy stance was that of a non-aligned country, based on a law that was passed four years earlier.

“When I now hear the flawed argument that Ukraine’s neutrality could make [Mr.] Putin less aggressive, I wonder how? It did not stop him from attacking us in 2014, so it is hard to see why it would stop him now,” Mr. Kuleba said.

He accused Russia of “threatening a new war … and putting forward bizarre and illegitimate ultimatums.”

Still, Russia is moving ahead with planned military drills with Belarus this month. The most active phase of those drills is scheduled for February 10-20. Those drills, at their nearest point to Kyiv, will occurr less than 100 kilometers (62 miles) from the Ukrainian capital.

It is Russia’s biggest deployment of combat troops and modern weapons to Belarus since the end of the Cold War, he said.

“All this will be combined with Russia’s annual nuclear forces exercise,” Mr. Stolten­berg said.

Early on February 3, Belarus accused Ukraine of violating its airspace by flying a drone that Minsk says it had shot down. Kyiv denied the accusation. In December, Belarus made a similar accusation involving an alleged Ukrainian helicopter flying across the border. That allegation was denied and Ukraine’s defense attaché was summoned to the defense ministry of Belarus.

Its purpose is “to bolster the resilience and perseverance of communities in eastern Ukraine in the face of Russia’s aggression,” the U.S. Agency for International Development said in a news release on February 2.