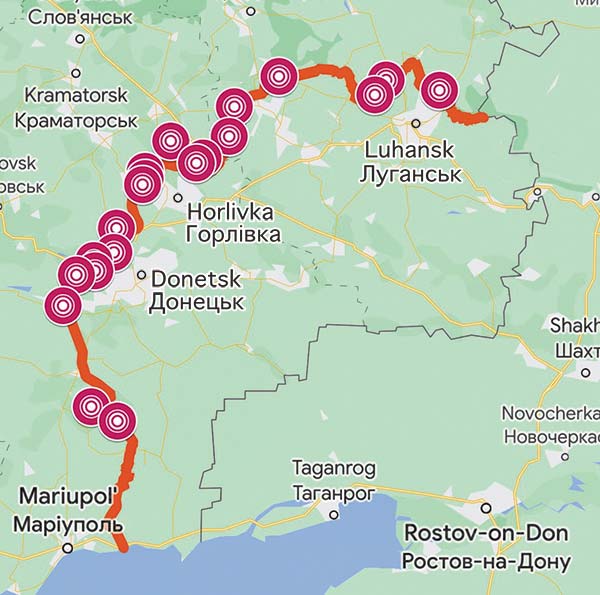 RFE/RL’s Donbas.Realities
A map of the front line in the Donbas region of Ukraine shows where clashes took place on February 17.

KYIV – On the morning of February 17, Russian artillery rockets struck the Kazka (fairy tale) day care center in the frontline town of Stanytsia-Luhanska in eastern Ukraine. Fortunately, the 20 children at the kindergarten were having breakfast in another room and were not harmed during the shelling. However, two teachers and a male employee suffered wounds, Ukrainian President Volodymyr Zelenskyy said on Twitter.

By 3 p.m. on the same day, Ukraine’s Joint Forces Operation had recorded 42 attacks along the front line in the two easternmost regions of Luhansk and Donetsk where Russia has waged a war of attrition since 2014 in a conflict that has killed over 14,000 people.

It was a grim reminder that such scenes could be visited upon the other 93 percent of Ukraine’s territory that isn’t currently occupied by Russia. Despite Moscow’s announcements that it is winding down military drills around Ukraine’s borders, the United States and officials in Kyiv say the opposite.

About 150,000 well-equipped Russian troops and sophisticated weaponry that could be used for a major offensive are still deployed near Ukraine and are being repositioned closer to the neighboring country’s state borders. Russian naval drills in the Black and Azov seas were scheduled to end on February 19 and Russia’s joint war games in Belarus are expected to end a day later.

Russian state-run news agency TASS cited Kremlin spokesperson Dmitry Peskov on February 17 saying that “the situation near the borders of Russia could ignite at any moment,” while blaming Ukrainian armed forces for “provocative actions.” He did not provide evidence for the claim.

In Moscow, officials said they delivered the Kremlin’s response to the U.S. on its security proposals that were initially put forth in December and which include demands for NATO to stop cooperating with Ukraine and cease further enlargement.

Russia’s response said the U.S. ignored its core demands, which also include a pullback of NATO forces from Central and Eastern Europe, while threatening a “military-technical” action that doesn’t include a further invasion of Ukraine.

“Ultimatums to remove forces from certain areas of Russian territory, accompanied by threats of harsher sanctions, are unacceptable and undermine the chance for a real agreement. … There is no Russian invasion of Ukraine, nor is one being planned,” the response said.

Kyiv and its Western allies, however, remain skeptical of Russia’s insistence of not having plans to encroach on further Ukrainian territory.

British Foreign Affairs Secretary Eliza­beth Truss said there is still a high likelihood that Russia could launch offensive actions, but also didn’t rule out that Moscow might choose the path of diplomacy.

“There is of course a big chance that there will be offensive actions by Russia. If not, then why are 100,000 troops on the border with Ukraine?” she said on February 17 while visiting Kyiv to meet with her counterpart Dmytro Kuleba. “But Russia can still choose the path of diplomacy, they can ensure de-escalation, they can withdraw their troops from the border, and I think it’s in the interest of European security, but also in the interest of Russia.”

She added that British financial assistance to Ukraine is being raised to 100 million pounds ($136 million) from 88 million pounds as the country’s economy feels the biting pressure of the ongoing Russian military threat.

“This is not confirmed either by Ukrainian intelligence data or by the data of the intelligence communities of our strategic partners,” Mr. Reznikov said on February 16. “Withdrawal of people is not enough – weapons and equipment must also leave.”

U.S. President Joe Biden told reporters on the White House lawn on February 17 that he also still sees the probability of a further Russian invasion as “very high.”

The U.S., Britain and EU have promised unspecified and more stiff sanctions on Russia should an offensive take place.

Ukraine has remained defiant in the face of the increasing Russian threat and Mr. Zelenskyy signed a decree to designate February 16 the day of national unity.

A 200-meter long blue-and-yellow national flag was unfurled in Kyiv’s Olympic Stadium that day. School activities were held with the national anthem spoken. A roving train covered with the national flag made stops in central and eastern Ukraine. The president visited Rivne and the Azov Sea coastal city of Mariupol in Donetsk Oblast during the working holiday.

He later released an eight-minute video referring to Ukraine as a “great nation of a great country” while urging calm and stressing “we are strong.”

Ukraine’s military says it is ready “for any scenario” that should arise.

Ukraine also called an urgent meeting on the security situation at the Vienna-based Organization for Security and Cooperation in Europe (OSCE). Kyiv triggered a clause in the 2011 Vienna document on risk reduction measures after Russia failed to adhere to the document for not providing a response within a 48-hour time frame regarding its military maneuvers near Ukraine’s borders.

“The United States welcomes the decision by Ukraine to call for this meeting,” the U.S. mission to the OSCE said. “Ukraine is well within its rights under Chapter III, paragraph 16.2 of the Vienna Document to ask for detailed information on the goals of the Russian Federation’s large-scale and highly unusual military buildup on the borders of Ukraine, in Belarus, and in occupied Crimea.”

Russia failed to adhere to the Vienna document in 2014 after Ukraine made the same request. In the wake of the Euro-Maidan revolution that year, Kyiv noted that Russia was massing troops to the east. By March 2014, Russia had forcibly taken over the Crimean Peninsula.

Speaking at NATO headquarters in Brussels, U.S. Defense Secretary Lloyd Austin also said he sees that additional Russian troops from among 150,000 moving “have moved even closer to the [Ukrainian] border.”

“I myself was a soldier not so long ago and I know that you will not take this kind of action without a reason. … Therefore, we, together with the allies, will remain vigilant,” Mr. Austin said.