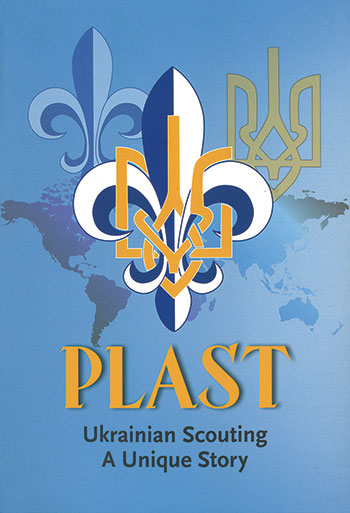 JENKINTOWN, Pa. – The long-awaited English-language history of Plast, titled “Plast Ukrainian Scouting: A Unique Story,” was presented on Saturday, January 14, at the Ukrainian Educational and Cultural Center (UECC) in Jenkintown, near Philadelphia.

The main author is the renowned historian Orest Subtelny. In addition, an editorial and coordinating committee, consisting of Orest and Tanya Dzulynsky, Oksana Zakydalsky, Myron Babiuk and Bohdan Kolos, was formed under the auspices of the World Plast Executive.

Natalka Firko, a member of the UECC board of directors and the Philadelphia branch of Plast Ukrainian Scouting Organization, began the program with an introduction of Larissa Kebuz, niece of the late Dr. Subtelny, who served as mistress of ceremonies for the event.

Ms. Kebuz introduced the main speakers of the book presentation: Marta Kuzmowycz, CEO of the World Plast Executive, and Mr. Kolos of Plast Canada, a member of the book editorial committee. Both speakers stated that the written history of Plast had been conceived a long time ago and evolved over many years. Archival material was researched extensively, including in Ukraine and the diaspora.

In the newly released book, Dr. Subtelny explains under what conditions Plast was formed in 1911. In that year, a small group of teachers, whose nation lived under foreign rule at the crossroads of empires, took the ideas of scouting’s founder, Robert Baden-Powell, adapted them to their circumstances, forming a Ukrainian scouting organization for the betterment of Ukrainian youth and to provide hope to the Ukrainian nation.

The organization was buffeted by history – repression, war, emigration, dispersal throughout the world – and finally found renewal in a free Ukraine. It was and is an amazing journey, truly a unique story.

In the second part of the program, friends and family spoke of their fond memories of Dr. Subtelny, who emigrated to Philadelphia in 1949 as a child and grew up in the tightly knit diaspora community. These included a friend from youth, Andrij Masiuk, his sister Oksana and her husband, Irenaeus Isajiw; niece Ms. Kebuz; Ihor Fedoriw and Jaroslav Kozak. Dr. Subtelny was a person who loved adventure, was an avid athlete and a member of the Burlaky fraternity of Plast. One of the first graduates of Harvard University’s Ukrainian Studies Program under the mentorship of Prof. Omeljan Pritsak, Dr. Subtleny was a historian and the author of the well-known book “Ukraine: A History.”

In the final moments of the program, Ms. Kebuz thanked all the speakers of the event, and concluded the evening with the traditional Plast scouting farewell songs “Sirily u Sumerku” and “Nich Vzhe Jde.”