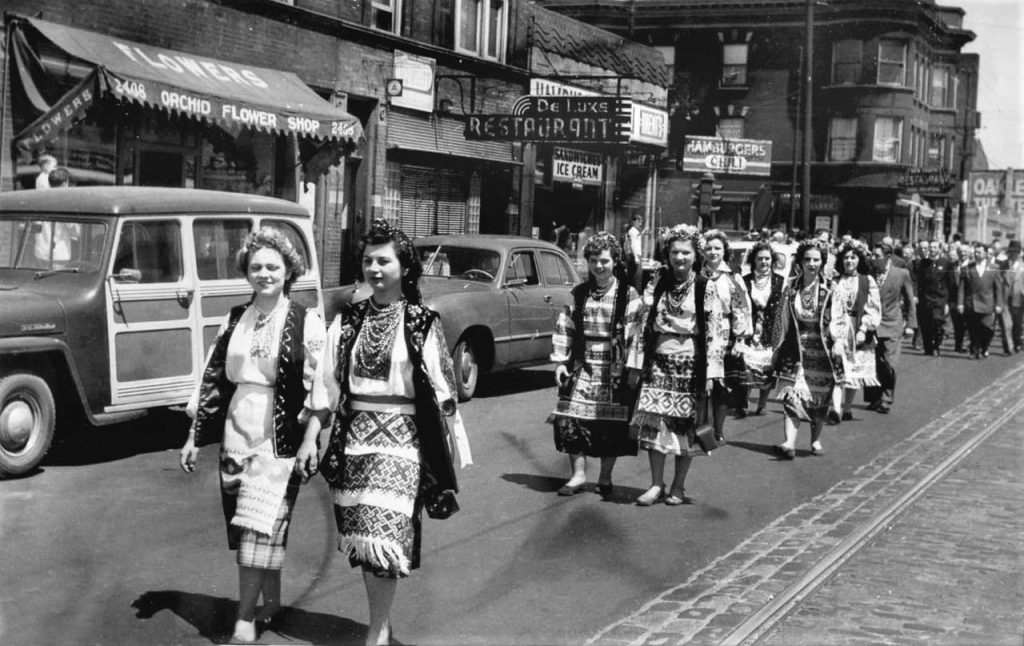 CHICAGO – The Ukrainian National Museum hosted an exhibit opening on October 1 and presentation of the work of Ukrainian Petro Oleksijenko, a military and civic activist, author and photographer.

All of the photos in the exhibit were discovered in and collected from the archives of the Ukrainian National Museum. Until that point, their existence had largely been forgotten. As a result, the exhibit, “Chicago-Ukrainians in the 1950s Through the Lens of Photo-Journalist Petro Oleksijenko,” showcases for the first time in decades images that depict how members of the Ukrainian diaspora in Chicago conducted their daily lives, as well as supported their homeland from across the ocean.

Mr. Oleksijenko, who upon his death in 1988 left behind a treasure trove of photos, was born in 1898 in the small town of Rzhyshchiv in the Kyiv region. He grew up near the Dnipro River and always recalled the mighty river as a powerful symbol of Ukraine.

In January 1918, Mr. Oleksijenko, together with other students his age, fought in the Battle of Kruty to prevent the Bolshevik army from advancing on Kyiv. For some reason, he would never recall the Battle of Kruty in his memoirs, perhaps because it was difficult to share one of the most tragic pages in the history of one’s country and one’s own life.

Mr. Oleksijenko became an active member of various Ukrainian veteran organizations and was a recipient of the Cross of Symon Petliura, the Steel Cross of the UNR, the Cross of Ukrainian Kozaks, and many other military awards.

After the defeat of the Ukrainian revolution, Mr. Oleksijenko lived as an exiled Ukrainian soldier in Poland, and it was during this particular period that he became a professional photographer.

After World War II, Mr. Oleksijenko found himself in a displaced persons camp in Augsburg, Germany, where he opened a photographic studio named Photo-World. At the beginning of the 1950s, he and his family immigrated to the United States and lived in Chicago. After living for a few years in the city, Mr. Oleksijenko became heavily involved in the civic, art and local activities of the Ukrainian community in the city.  He also took numerous photos chronicling parades, celebrations and the everyday life of Ukrainians in Chicago at that time. His documentary work is especially valuable as there are now fewer and fewer individuals alive who lived through this period of the Ukrainian diaspora in Chicago.

“We have many amateur photographers that were deported from their homes and lived either in exile or in camps, but really, and in all actuality, they are spread out all over the world. There are people who either made their own photographs or acquired them and stowed them away as personal keepsakes,” Mr. Oleksijenko wrote in 1956 in article for the Journal of the Ukrainian National Museum in Ontario, Calif.

“However, they would not take into consideration that one of their particular photographs is of great value, as it represents a document of a deported Ukrainian’s life. Therefore, everyone who has such photographs, which are of historical significance, should send them to museums, so that our future researchers could have material that can continually provide tremendous benefits to the future Ukrainian state,” Mr. Oleksijenko wrote.

When conducting research on Mr. Oleksijenko’s photos, staff of the Ukrainian National Museum in Chicago found that the photographer’s work captured three mass demonstrations held by Ukrainians in Chicago in the 1950s: “Loyalty Day Parade,” “I Am an American Day,” and a 25th anniversary parade commemorating the victims of the Holodomor.

The events took place either in downtown Chicago or in the Ukrainian Village area of the city. Patriotic celebrations for “Loyalty Day” and “I Am an American Day” allowed Ukrainians to display their thankfulness to America for accepting them and allowing them to live in a new homeland, and they let Ukrainians bring attention to the American public about the destructive nature of the Communist regime in the Soviet Union.

The exhibit includes Mr. Oleksijenko’s images of the campground in Round Lake, Ill., which was a popular vacation and gathering spot for Ukrainians in and around Chicago. One can even see a photo of Ukrainians fishing and also cooking a fish broth soup (Yushka) over an open fire.

Natalya Mykhailenko, who visited the exhibit and viewed Mr. Oleksijneko’s photographs, said she was touched by the photographer’s work.

“I was impressed by the fact that this exhibition shows significant moments in the life of the Ukrainian community in the 1950s. Photos, which are more than half a century old, show people staring back at us, who are educated, who are organized, and who remember their roots,” Ms. Mykhail­enko said.

Mr. Oleksijenko’s photos capture his compatriots as they were getting acquainted with life in United States, such as learning the English language and buying their very first car. In looking at some of his images, it is easy to imagine Mr. Oleksijen­ko smiling while he takes his pictures, largely because some even convey a great sense of humor. How else might one describe a perfectly-timed photograph of bears seemingly taking toll payments from Mr. Oleksijenko and his wife, Osypa, upon the couple’s entry into Yellowstone National Park!

“I had such a strong wish for the people on these photographs to start talking and tell me all about their lives back then,” said Oksana Mikolyash after viewing the exhibit. “Looking at these photos allows you to feel the warmth of the cameraman as he was trying to capture the emotions of the people in front of him.”

During the exhibit opening of Mr. Oleksijenko’s photographs, the president of the Ukrainian National Museum, Lydia Tkaczuk, underscored the work the museum has done to systematically archive its collection of documents and artifacts from the Ukrainian diaspora.

Special thanks went to the Heritage Foundation of First Security Federal Savings Bank for providing seed money to finance the massive project. The archival process included cataloging, scanning and digitizing documents so that the records can be accessed online by American media or anyone else interested in the archive.

The sponsor for the exhibit was Ellen Lopatkina, president of Nortia Logistics, Inc. In her remarks at the exhibit opening, Ms. Lopatkina said Mr. Oleksijenko’s photos document the hard work of previous generations of Ukrainians in Chicago. That work today serves as an example and an introduction to the Ukrainian American community for new Ukrainian immigrants to United States.

A presentation on Mr. Oleksijenko’s life and his photographic work was given by the Ukrainian National Museum’s archivist, Halyna Parasiuk, who spent several months organizing, cataloging and digitizing the collection of Mr. Oleksijenko’s 2,000 photos.

Individuals who attended the opening of the exhibit shared their impressions of the photographs. But after the event formally concluded and most of the crowd dispersed, another interesting activity began – the remaining attendees, ones who actually grew up in the Ukrainian Village, began trying to identify people they knew in Mr. Oleksijenko’s photos. The museum staff believes individuals can supplement Mr. Oleksijenko’s work by documenting the oral histories of others who lived through this period in the life of the Ukrainian diaspora in Chicago.

The Ukrainian National Museum invites readers to visit the photo exhibit, which will run from October 1 to November 30. More information can be found at www.ukrainiannationalmuseum.org.

Halyna Parasiuk is the archivist at the Ukrainian National Museum of Chicago.